BOOK SOUNDTRACK - IT WAS YOU BY ANNA CRUISE 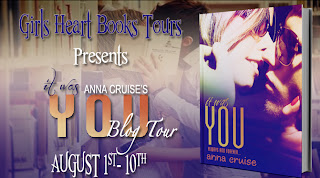 As a reader I love learning about the writing process such as what music the Author listened to whilst writing their book. I also love to know what music they would pick as an ideal Book Soundtrack.
Another thing I love to ask (being a nosey reader/blogger/reviewer of course) is who they would like to play certain characters in their book should it ever be made into a movie.

Below Anna Cruise answers the question of what music she would choose for a Book Soundtrack.

Wow. The perfect soundtrack. That would imply that my book would be made into a movie. And I would be so freaking excited and weirded out that my ears would be buzzing and I wouldn't hear shit while it was playing on the screen.

But I know that's not the answer you're looking for so I'll share the songs that were on constant replay in my head as I wrote It Was You.

When I Was A Teenage Whore – Hole. Uh, Annika, in the opening scene in the bedroom? Yeah. 'Nuff said. Lyrics don't exactly match up but the title certainly says it all...

Sparks Fly – Taylor Swift. Abby and West in line at Mesa. Sparks definitely flew, not all of them good. And the lyrics...oh my God. Say what you want about Taylor Swift but that girl know how to tell a story with her lyrics.

Feeling This – Blink 182. The bedroom scene when things get hot and heavy between Abby and West the first time around. Hell. Yes.

Crazy Roommate Song – Enur. OK, so this is that crazy roommate commercial from Target a few years back. And all I could think of while writing Tana's scenes with Athena, her crazy roommate, was how their relationship was sooo not like the one depicted in the commercial. :)

Mean – Taylor Swift. Honestly, is there a better song to describe the way Abby feels about Annika?? I can totally see this playing when she goes off on her at SDSU.


So there you have it. Of course, a real movie soundtrack would have great instrumental, Danny Elfman inspired music, too...and that would be freaking AWESOME. Hopefully the buzzing in my ears from the panic and excitement won't be too terribly loud... :)
Posted by Jeanz xx at 11:30