Indigo Fierce Fiction’s #MurderontheBeach blog tour officially kicks off today, right here on my blog! – and further down the page on this very post is a little sneak peek at the first chapter of the third in the Soul Beach trilogy – SOUL STORM – by Kate Harrison is for your reading enjoyment! 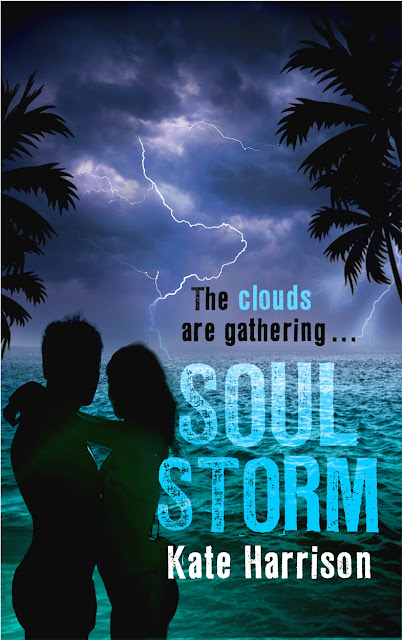 When Alice Forster received an email from her dead sister she assumed it was a sick practical joke. Then an invitation arrived to the virtual world of Soul Beach, an idyllic online paradise of sun, sea and sand where Alice could finally talk to her sister again - and discover a new world of friendships, secrets and maybe even love . . . in the final twists of the tale, can Alice unmask the killer without becoming the next victim?

Someone is stalking Alice Forster. She's sure it's her sister's murderer, but her parents think she's cracking under the stress of Meggie's death.
Only in the virtual world of Soul Beach - an online paradise for the young, the beautiful and the dead - can Alice feel truly free.

But in SOUL STORM there's trouble in paradise . . . Clouds are gathering. A storm is brewing.
The killer is about to strike…

Loneliness is worse than death. It rots you from the inside out, making you disappear. I avoid mirrors, because I am afraid I will see a space where I should be. And when I accidentally catch a glimpse of my reﬂection in a window, I am surprised at how solid I look. How ‘normal’. All that keeps me going is the knowledge that, one day soon, the loneliness will end. When I conﬁde in the right person, I know I will ﬁnally be understood. Now, I think of what happened to Meggie as a dress rehearsal. I didn’t remember my lines, or the right time to exit. It was a failure on my part that meant Meggie and I both suffered more than necessary. Yet the lessons I learned from Meggie will beneﬁt her sister – how bittersweet is that? This time, I will get it right. I can only hope that Alice is intelligent enough to understand her role. To realise it is in her interests to be understanding.

I think she’s following me. Again. I check the mirror. Nothing. Signal. Move into the kerb, then pull the handbrake, hard. Check the mirror once more. Where is she hiding? My instructor is smiling. ‘The test should be a doddle, Alice. You’ve good motor control, and your hazard awareness is excellent for someone of your age. When I taught your sister, she seemed oblivious to the rest of the world . . .’ He stops, blushing all the way across the dome of his bald head. ‘It’s OK,’ I say. ‘I don’t mind it when people talk about her. We don’t have to pretend she never existed.’ He takes a deep breath. ‘Of course. I just meant – well, you have the makings of a very safe driver, Alice. Conﬁ dent, but observant, too.’ I won’t tell him that I love driving because it gives me eyes in the back of my head, and a hard shell of metal to protect me. And because the car lets me cover more ground than I could ever hope to on foot. ‘Thanks, Mr Gregory. So – next Monday, eleven thirty. My date with fate.’ He nods. ‘You’ve got some practice drives set up this weekend?’ ‘With friends, yes.’ ‘Don’t pick up any bad habits between now and then. Hopefully you should be on the road on your own by Monday afternoon.’

‘Thanks.’ I’m about to climb out of the car when I see something in the rear-view mirror. It’s hot, even for July, and the street is busy with sunburned shoppers, but I’m certain that was her. Well, as certain as I can be. ‘Alice? Time to let go of the reins now.’ He taps the steering wheel and I release the seat belt, bracing myself to leave the one place I feel in control. ‘You can’t wait to be in the driving seat full-time, can you?’ I fake a smile. When I step out, the pavement feels spongy under my feet, and goosebumps ripple across my skin, even though the sun is scorching hot. Out here, I am completely exposed. I look for her wiry body, straw-coloured hair, pale face. If she was following me, she’s found a way to disappear. Town shouldn’t be this busy on a Thursday afternoon, but the pavements are full of people shopping for their holidays. Crowds are perfect cover. ‘Watch it.’ A skateboarder misses me by millimetres after I step right in front of him. ‘Sorry . . .’ He’s already gone, the death-head design on his t-shirt getting smaller and smaller. I try to slow my breathing, think straight. Why would she follow me? I’ll be seeing her on Sunday; she’s always got another visit planned, whether I want to see her or not. So there’s no logical reason for her to snoop on me. But logic can’t explain that feeling of darkness. The same one I felt in my sister’s old uni room, and on the smoky streets of Barcelona, and at Tim’s inquest. It’s stronger than a feeling. It’s instinct. ‘. . . bridge o-ver tr-ou-u-bled water . . .’ Two girls I half recognise from school are busking on the street corner. They smile at me, and I smile back. As I pass, they exchange glances with each other. I know what people think of me. Yeah, Meggie’s death was a tragedy, but the word on the school corridor is that I should have got over it by now. If only they knew how hard I’ve tried to move on. But the visit on Sunday isn’t a choice. It’s not like I want to hang out with someone I suspect of killing two people, and almost murdering a third. Of course what I’m doing could be dangerous. Stupid. No one sane would willingly get close to a potential psychopath. But how else can I get justice for the people I’ve lost? First, my sister, murdered in a way that the entire world agreed was motivated by possessiveness or jealousy. Then her boyfriend, Tim, killed in a staged suicide attempt that had everyone fooled except me and his closest friend, Zoe. And where is Zoe now? She’s in a coma, after an ‘accident’ in Barcelona that no one witnessed. The world has accepted that everything was wrapped up by Tim’s ‘suicide’. That he was responsible for my sister’s murder. So why can’t I let it lie? Because my gut tells me my stalker’s guilty, just as it convinces me she’s tracking me like prey right now, when she should be studying twenty miles away. It wouldn’t be the ﬁ rst time she’s done it. Last week, as I ate my lunch alone on the far side of the playing ﬁ eld, that same icy sensation spread through me, the feeling of being watched. But I dismissed it as paranoia: till I walked straight into her outside the school gates, three hours later. She blushed, insisting she was ‘just passing’. Since then, I’ve realised I must listen to my instincts. And my instincts say that only one person knows the truth about my sister’s death. Sahara.

And the great news is . . if you enjoyed the above Chapter
you can buy the book NOW! TODAY!