BLURB from Goodreads
Think of it as Jason Bourne meets Good Will Hunting.(All April proceeds from PATRIARCH RUN will be donated to Jefferson County Open School in Lakewood, Colorado. The money will be used by the school's PTSO to bring local authors into the classroom.)Billy discovers that his father might be a traitor, that he was deployed to safeguard the United States from a cyberattack on its military networks. After that mission, his father disappeared along with the Chinese technology he was ordered to steal–a weapon powerful enough to sabotage the digital infrastructure of the modern age and force the human population into collapse. Against a backdrop of suspense, the story explores the archetypal themes of fatherhood, coming of age and self-acceptance through a set of characters that will leave you changed.

ABOUT THE AUTHOR & BOOK 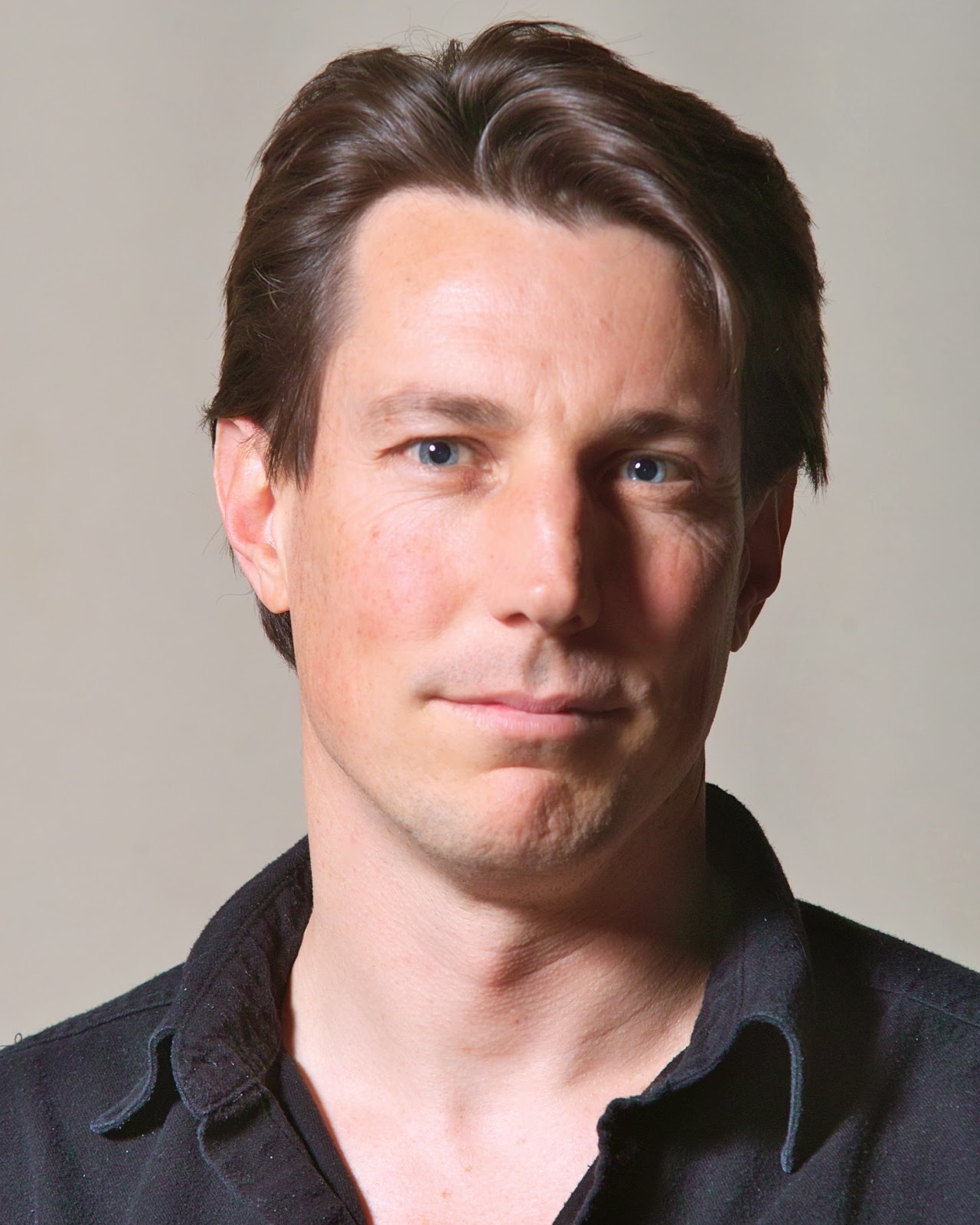 Benjamin is an Advisor at Jefferson County Open School where he has made a career out of mentoring young people as they come of age. He wrote the novels PATRIARCH RUN, IN SIGHT OF THE SUN and FIDELITY. He also writes about parenting and education.

Patriarch Run is a thoughtful and character driven literary thriller. Think of it as Jason Bourne meets Good Will Hunting.
Billy discovers that his father might be a traitor, that he was deployed to safeguard the United States from a cyberattack on its military networks. After that mission, his father disappeared along with the Chinese technology he was ordered to steal–a weapon powerful enough to sabotage the digital infrastructure of the modern age and force the human population into collapse.


Against a backdrop of suspense, the story explores the archetypal themes of fatherhood, coming of age and self-acceptance through a set of characters that will leave you changed.

I teach writing to high school students. But I don’t see myself as a high school teacher. My job, as I see it, is to mentor young people as they come age.

Right now I’m teaching The Omnivores Dilemma by Michael Pollan. I use the text to teach the kids to read. I use the ideas in the book to teach them to think. And the story Pollan tells about food...I use that as a guide for our own educational adventures in the food chain. Like Pollan does in the book, we visit farms. Food markets. I bought the kids McDonalds then drove them to a feedlot with a 100,000 head of cattle that filled our nostrils with the stench of feces and urine. The poop was piled twenty feet high by tractors. The cows were cover in it up to their spines. Our lungs were singed from the ammonia.

I had the kids eat the burgers and take it all in.

Later in the semester I had the students interview their oldest living relatives. Out of that interview, the students brought traditional recipes to class, and we prepared meals together.

Why? Because I’m their English teacher. It’s my job.

I also facilitate a writers’ group. Because I believe kids need mentors (more than just me), I partner with Lighthouse Writers Workshop, a Denver based community, to bring local authors into my classroom.

We meet at lunch every Wednesday, the writers’ group. This is a very committed group of writers (some students have graduated and still participate in the group via email from college). They take their writing seriously and provide one another with thoughtful, constructive feedback.

Once a month, we have a guest author. The guest author actually reads the week’s submission and critiques it, along with the rest of us. Imagine being seventeen years old and having your story critiqued by a published author.

After the critique session, we invite any interested student in the school to a craft talk with the author. After which, the kids get an opportunity to interact more openly. They get to ask questions about the writing process. About inspiration. About how to get published.

What’s really happening is that relationships are being developed. This is the secret to education. They can pass any law they want at the state or at the federal level. They can mandate testing. Or they can sell our schools to corporate enterprises. None of that will fix the problem we have with education in America.

Because the answer is this: teaching is about relationships. Kids need mentors. It’s that simple. They learn from the people they trust.

What happens in this guest author program is magical. Kids begin to see themselves as writers. They develop authentic relationships with authors in the community. They have consultants.

At my school, every student completes a Career Exploration Passage. It’s one of six rites of passages each student undertakes to graduate from high school. In the Career Exploration Passage, as the title indicates, students explore a career. The project involves an internship, research, consultants, a series of interviews, a resume. And eventually the student maps out a path to his or her chosen field.

The beauty of the curriculum at the Open School is that the students I work with get to consult with actual professionals. They get to interview our guest authors and develop relationships that will last long after high school is over.

To make all this work I went to our school’s Parent Teacher Student Organization (PTSO) and asked for $50 a month to bring local authors into the classroom. The parents on PTSO generously supported the program, and they also asked me to consider ways to raise money to pay for it.

It was a reasonable request on their part, responsible even, but I had to think about it. What could I do to help support my own program?

Meanwhile, I went to Lighthouse Writers Workshop and told them what our PTSO was willing to do. Lighthouse generously matched my school’s contribution.

So we had $100 a month to bring local authors into the school. Not much. But money communicates value. By paying authors what we can, we let them know that we value their profession. Their work. Moreover, writers are hungry, and, so far, the guest authors have been grateful for the gig.

Then it finally came to me a few weeks ago: how to raise money for the program. I had a book release pending for my literary thriller Patriarch Run. It occurred to me that I could donate the April proceeds to PTSO and, in that way, raise money to support the guest author program at the Open School.

If you’d like to know more about our amazing school (there have been many books written about it), let me know. And if you’d like to learn more about me or my stories, you could drop me a line about that, too.

Rachel never rode over the summit of the mountain because of the treacherous nature of that trail. It was against all rational judgement that she found herself on it now. At tree line the horse climbed over the ridge, stepped out of the spruce forest and onto the packed scree that made up the trail from there to the tundra. The mountainside below them gave way completely to granite cliffs.
The trail snaked along the top.
At the highest point among the cliffs, with nearly a thousand feet of empty space beneath the hooves of Old Sam, Rachel spotted two figures several hundred yards in the distance. She talked to the horse. Said she couldn’t be sure, but it looked to be a man and a bristlecone pine.
The horse walked on.
“Watch your step, Old Sam.”
As they closed the distance, Rachel recognized him and saw that he was untying a rope from the gnarled tree.
“You couldn’t have picked a better view.”
Regan had looked at her once when he first heard the hooves on the scree, then he went back to his rope. Now he looked up at her face. Looked the horse over. Then he studied her eyes. She had divined his purpose.
He looked away. “Yeah, it’ll do.”
The two knew each other, but had rarely had cause to speak.
“I don’t mean to meddle, but it seems to me that the rope is ill conceived.”
Regan finished retying the rope to the tree, tested the knot and asked, “How so?”
“Too much length, and the wind, along with your own momentum, will lacerate your flesh against the rock.”
He looked over the edge. “That occurred to me as you were coming up. I shortened the rope.”
“Not enough length, and it’ll be slow and painful.”
He studied the coil of parachute cord on the ground and said with very little inflection. “It looks about right to me.” Then he walked over to a granite boulder.
“Seems you’ve thought it through.”
He sat down and pulled off his right boot. “We’ll see.”
Rachel reached behind her and took out a water bottle. Drank. She offered the bottle to Regan with a gesture.
He put out his lower lip and shook his head almost imperceptibly.
She capped it and put it back.
“Mind if I ask you a question?”
“Go ahead.” He pulled off the other boot.
“Why the rope and the cliff?”
“Coyotes.”
“I don’t follow.”
“When I was a kid, coyotes killed my dog. I heard the fight, but by the time I found her in the dark, they were already feeding on her guts.” He took off both socks and stood up. “They pulled her insides out through her anus.” He stepped over to the precipice and surveyed the valley.
“How old were you?”
“Six.”
Rachel nodded her head, which he didn’t see.
“With only the rope or only the cliff, I’d be left for the coyotes.”
“But this way it’s only insects and birds.”
He spun to face her, his widened eyes betraying surprise–or maybe alarm.
“Birds always eat the eyeballs first,” she continued. “Must be a delicacy to them. The insects just want a womb for their maggots. A nutrient-rich source to give their young a good start.”
Regan fidgeted with the socks in his hands.
“You could’ve picked a high branch.”
He looked distracted, as if he was still digesting the other image. “I thought of that.” He walked over to his boots, unbuttoning his silk shirt.
“Yeah.”
“A bear could cut the rope.”
“It seems you’ve thought it through.”
He took off his shirt, folded it and set it on a rock. “We’ll see.”
Rachel looked back over the trail. “Well, I best be goin’.”
“OK.”
She turned the horse, “Those are some fancy clothes.”
“Yeah.” He took off his belt. “The boots alone cost me eleven hundred dollars, and that was before tax.”
“I suppose it’s fitting.”
“It seemed that way to me, too, down at the house. But after being up here, I don’t think so.”
“How so?”
He wasn’t looking at her anymore. “I think I’ll be more comfortable without them.”
“What are you going to do with those eleven hundred dollar boots?”
He carried the clothes over to the bristlecone tree, put the boots on top of the folded shirt, the socks inside the boots and the belt around the boots. “Come back and get ’em if you like.”
“Well, I best be gettin’ along.”
“Ok.”
“You know my place?”
“I know it.”
“We’ll be sittin’ down for supper around six. Sirloin and potatoes. If you have a mind to, you’re welcome to stop by.”
He picked up the loose end of the parachute cord and started tying a hangman’s noose. “I appreciate that.”