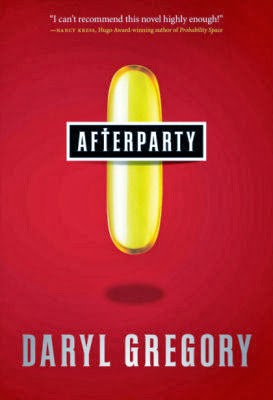 BLURB from Goodreads
It begins in Toronto, in the years after the smart drug revolution. Any high school student with a chemjet and internet connection can download recipes and print drugs, or invent them. A seventeen-year-old street girl finds God through a new brain-altering drug called Numinous, used as a sacrament by a new Church that preys on the underclass. But she is arrested and put into detention, and without the drug, commits suicide.Lyda Rose, another patient in that detention facility, has a dark secret: she was one of the original scientists who developed the drug. With the help of an ex-government agent and an imaginary, drug-induced doctor, Lyda sets out to find the other three survivors of the five who made the Numinous in a quest to set things right.A mind-bending and violent chase across Canada and the US, Daryl Gregory's Afterparty is a marvelous mix of William Gibson’s Neuromancer, Philip K. Dick’s Ubik, and perhaps a bit of Peter Watts’s Starfish: a last chance to save civilization, or die trying. 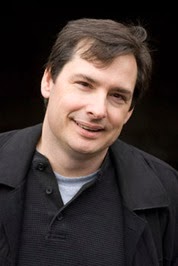 What is your name, where were you born and where do you live now?
Howdy, I’m Daryl Gregory. I was born in Chicago, and now live in State College, PA, but I was raised by Tennessee mountain folk, so I’m required by law to say “Howdy.”

Did you always want to be a writer? If not what did you want to be?
Always. The urge to write came hand in hand with reading stories. Who doesn’t want to be a writer? Everything else I’ve been--school teacher, technical writer, middle manager, programmer--were all identities I’ve taken on purely for research purposes. Also money.

When did you first consider yourself as a "writer"?
The bar keeps moving. I thought I’d feel like a writer when I sold my first short story. And I did! For about ten minutes. The feeling has yet to latch on permanently. Some days, when I have no idea what’s supposed to be happening in the novel, I say to myself, Maybe I should switch to ceramics.

Did it take a long time to get your first book published?
Practically no time at all. I drew the cover myself, and handed it to my parents. I was eight.
I thought they’d all be that easy. Then in my thirties I took eight years to write a long novel that never sold. I later cut it up for parts, selling off pieces as short stories. The book that became the first novel not published by relatives was Pandemonium, and that took about two years to write, and another year and a half to find an agent and an editor at Random House who’d pay money.

Do you work another job as well as your writing work?
I stepped back from my full-time job as a programmer several years ago. Now I work half-time: in the mornings I write code, and in the afternoons I write fiction. Sometimes when my novel won’t compile, I go back through and find out I’ve left off a semi-colon. That, by the way, is a hilarious joke for programmers.

What is the name of your latest book, and if you had to summarise it in less than 20 words what would you say?
Afterparty is a near-future SF thriller about neuroscience, smart drugs, and religion. Is that twenty? Here are four more words.

Who is your publisher? or do you self publish?
Tor Books.

Do you have a "lucky charm" or "lucky routine" you follow when waiting for your book to be accepted by a publisher?
When I’m waiting for a book to come out, I drink coffee constantly. No, wait--that’s every day. What was the question? I need more coffee.

How long does it usually take you to write a book, from the original idea to finishing writing it?
Some ideas have been percolating for years. But once I finally figure out that one of the ideas is novel-worthy, it can take anywhere from six months to two years. I will say that as I’ve gotten more disciplined about writing every day, my calendar speed has increased, even though the number of hours I spend on a book remains flat.

Which of your books were easier/harder to write than the others?
The first novel is always the hardest. But what no one tells you, every novel is the first time that book’s been written.


I have a tough time staying in one genre. I’ve written science fiction, fantasy, and unclassifiable stuff that is just plain weird. For example, my next book after Afterparty is a standalone novella called “We Are All Completely Fine” that will be out in August 2014, and it’s dark fantasy. I’ve also finished a YA horror novel that will come out from Tor in 2015.  But my next book after that, which I’m working now, will be science fiction for adults.  I tell young writers that the house of genre has many rooms, and you can steal the furniture from any of them. 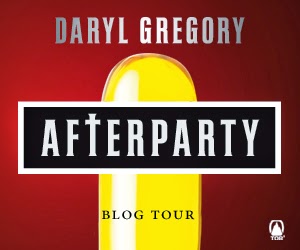