PROMO/REVIEW - OF BREAKABLE THINGS BY A. LYNDEN ROLLAND 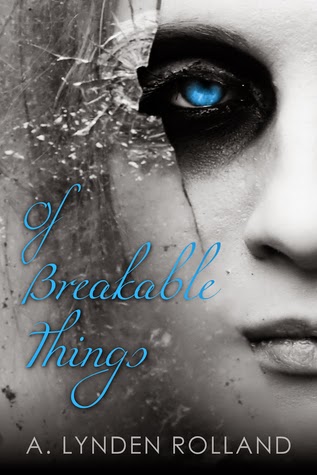 BLURB from Goodreads
A captivating debut about the fragility of life, love, and perspective.When Chase dies tragically, Alex embraces her own mortality. What she didn’t expect was that she’d have to make a choice: forget the years of pain and suffering once and for all, or linger as a spirit and get another chance at life and love.Alex doesn’t hesitate to choose; she’d follow Chase anywhere. But the spirit world is nothing like she expected, and Alex finds she's forced to fight for her life once more. For even in a world where secrets are buried much deeper than six feet under, a legacy can continue to haunt you—and in a place this dangerous, no one is resting in peace.

INITIAL THOUGHTS
I am intrigued with this one to see how the Ehlers Danlos Syndrome is portrayed as it is a syndrome that myself, my mother and my daughter all have. Also apart from that I am interested to see how this author depicts the afterlife too. The cover is very striking so I guess the book will really strand out on the bookshelf.

MY REVIEW
I received a free copy of this one in exchange for my honest review. I find the cover really striking and it certainly makes you want to know more. I love the characters, the Lasalle brothers and of course Alex. All the "action" takes place after they are dead. We begin in a room with two exits and Alex is given the choice of which door to go through determining what her afterlife will be. She chooses the door that lead to Eidolon.(apologies if I've spely it wrong). A version of the afterlife that contains a kind of academy.
Alex has always been ill and treat somewhat like a "china doll" or as it says in the title a "breakable thing". This is one of the reasons I wanted to read the book as the book says Alex has Ehlers Danlos Syndrome. I wanted to know how it would be explained or dealt with. Well it was stated alex had it and then a brief, explanation crossed with a preaching description and then that's more or less where it ended. The only other reference about it was when Alex's "life" was talked about and then it was referred to as her "illness".
Once in the afterlife and chase and Alex are reunited we learn that Chase loves Alex, yet in mortal life didn't dare speak up as her didn't want to lose her friendship. One of the other Lasalle brothers, Jonas also loves Alex but see's that she is in love with chase so feel resentful towards his own brother. Jonas thinks Chase always wins, always gets what he want. So Jonas is an easy target for a secret society, that has strange initiation quests. He even delivers his brother into danger whilst trying to fit in with the society. e also ironically ends up putting the girl he loves in danger too.
I really can't say anymore as I would be telling you the whole book. As I have said I loved the characters and how they all interacted, and their relationships. the easiest way I can describe Eidolon is its the Hogwarts of Afterlife! This book has the characters, some parts of a decent plot but to me felt like it kept getting lost along the way. I persevered with reading the book, though on more than one occasion I had felt like simply giving up on it. To me a lot of the book is sort of left for you to fill in perhaps, I'm not sure how else to explain it.
The book reminded me of a couple of books, in that the Afterlife reminded me a little of Mary Tings Afterlife in her Crossroads Saga books (which I loved) and I got really exited expecting much more than was actually delivered. It also reminded my of another book . . .called Exiled by J.R. Wagner, it was really "deep" and dark.
So did I enjoy the book? It was ok, but the mention of EDS was really irrelevant to the rest of the book. I had been expecting more. Would I recommend the book? Perhaps to someone who read and loved Exiled by J.R. Wagner.  Would I read another book if this one was going to be a series? Being totally honest probably not.  Would I read other books by this Author? I'd take a look but not sure it would depend on the book. Though I did enjoy some parts of the book.
Posted by Jeanz xx at 10:30