Best-Selling Author Serves Up Creole And Crime With
Bad Karma In The Big Easy! 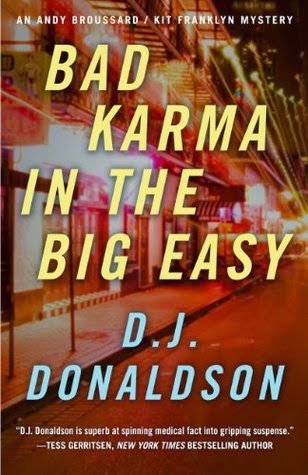 BLURB from Goodreads
Andy Broussard, the plump and proud New Orleans medical examiner, obviously loves food. Less apparent to the casual observer is his hatred of murderers. Together with his gorgeous sidekick, psychologist Kit Franklyn, the two make a powerful, although improbable, mystery-solving duo. Among the dead collected in The Big Easy floodwaters after Hurricane Katrina are three nude female bodies, all caught in the same brush tangle, none with water in their lungs. Broussard knows in his ample gut that this was not an act of God, and not the work of Katrina. But Broussard has perhaps the biggest challenge of his colorful career. The city and all its records are destroyed, practically the entire population is scattered, the police force has no offices, and many of the rank and file (who haven't defected) are homeless. Soon, Broussard and his sidekick are on a dangerous journey through the obscenely damaged city, leading them to a kind of evil that neither of them could imagine.

Bad Karma in the Big Easy

Don is a retired professor of Anatomy and Neurobiology.  His entire academic career was spent at the University of Tennessee Health Science Center, where he published dozens of papers on wound healing and taught microscopic anatomy to over 5,000 medical and dental students.  He is also the author of seven published forensic mysteries and five medical thrillers. He lives in Memphis, Tennessee with his wife and two West Highland Terriers.  In the spring of most years he simply cannot stop buying new flowers and other plants for the couple’s backyard garden.