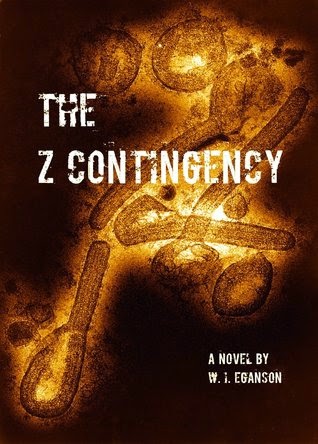 BLURB from Goodreads
Dr. Gary Ecks was a world class virologist at the CDC. His specialty was viral hemorrhagic fevers, and he had accurately predicted numerous outbreaks. His instincts about them had always right, so his latest prediction terrified him. He knew what the world was going to look like if he didn’t get ahead of it, and prevent it. Only this time, was he wrong...?


What is the name of your latest book, and if you had to summarise it in less than 20 words what would you say?
This isn't quite 20 words, but I thought I'd try my hand at haiku....


What can we expect from you in the future?  ie More books of the same genre? Books of a different genre?
While The Z Contingency was conceived to have a complete plot, with beginning, middle, and end, it was also intended to set the stage for future stories set in a post-apocalyptic world.  I have several plotlines that I would like to weave into a couple more books in this setting. There's a plot element that also makes it possible to create stories that take place in the past; something I'm also considering for a future novel.

Do you have plans for a new book? Is this book part of a series?
Two, possibly three, story ideas are in very early stages of planning.  At the moment, I’m spending most of my time trying to get exposure to The Z Contingency.  I had a great deal of fun writing it, and hope that readers will have as much fun reading it, but with all the great (and probably some not-so-great) stories being released by Indie authors alone, getting my story into the readers’ hands is quite the challenge.

What genre would you place your books into?
This is a tricky one.  While the zombie theme is central to the story, I hesitate to call this a zombie story since I usually associate those with the horror genre.  To me, movies like World War Z, 28 Days, and Night of the Living Dead (or any of the George Romero films) clearly fall into a zombie genre.
The Z Contingency doesn’t really have many horror aspects to it, although there are a couple of somewhat gory scenes.  I’ve been categorizing it broadly in the the science fiction genre, and sub-categorizing in post-apocalypic/dystopian where these are available choices.  I’ve even toyed with the idea of categorizing under thriller or action/adventure due to a major plot element involving a shadow government organization.

What made you decide to write that genre of book?
In general I've always enjoyed reading science fiction. I think I've always known that if I were to give writing a go, it would be in the general sci fi realm.

If you had to choose to be one of your characters in your book/books which would you be? and why?
I'd choose one the agents. They're smart, get to play with all the cool gadgets, and are involved in all the action.

Do you gift books to readers to do reviews?
Yes. I've received a few requests and also sent unsolicited copies out for review. I figure it's a great way to get the word out about the book.

Do you basic plot/plan for your book, before you actually begin writing it out? Or do you let the writing flow and see where it takes the story?
A little bit of both. I start by thinking about the overall main plot, then identifying the "problem" that causes the characters to react or throw their world into turmoil.  Sometimes free flow writing works for me to get over a writer's block or to test an idea and see where it leads. This can also lead to identifying subplots to weave into the story. I definitely don't plan out all of the details before putting pen to paper. I actually mean this literally, by the way.  I do most of my writing on the computer but I do a lot with fountain pen and paper. I sometimes feel the act of writing by pen helps me be more creative.

Have you ever based characters on people you know or based events on things that have happened to you?
Yes. I have friends with unique interests or character traits, that I find can be mixed and matched to give characters depth.


I hope not, but I can imagine a time when tablets are like TV's, i.e. everyone has them, in which case access to ebooks would be easy. I have friends who like the feel of paper and buy printed books, but they seem fewer and farther between, and somewhat of a dying breed.  I think there are a lot of people who currently own iPads or NOOKs that find themselves purchasing ebooks more than printed versions. It will likely increase with each generation.
Posted by Jeanz xx at 03:00