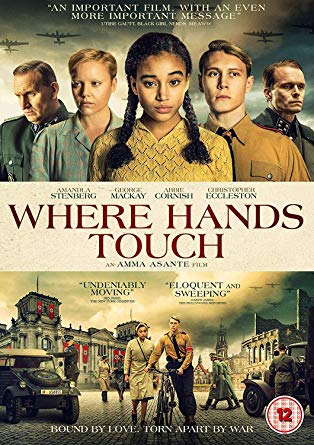 ABOUT THE FILM
Germany 1944: 15-year old Leyna (Amandla Stenberg), daughter of a white German mother and a black father, lives in fear due to the colour of her skin. When she meets Lutz (George MacKay), the son of a prominent SS officer and a member of the Hitler Youth - mandatory for all Aryan boys since 1936 - the two fall helplessly in love, putting both their lives at risk.

REVIEW
This film is set in Germany, when Hitler is beginning his reign of terror. I would imagine the majority of people will have heard about the Holocaust and all the Jewish people that were herded like cattle first into ghettos and then into "work camps" and concentration camps, but did you know that Hitler also rounded up almost anyone that didn't fit in with his perfect image of his super race of people. Hitler only wanted strong, blue eyed blonde haired people in his human race.

The main character in this book is Leyna (played by Amandla Stenberg), who is just 15 years old, so in the eyes of many still a child who should be attending school and having a worry free childhood. The problem is that Leyna does not git into Hitlers perfect vision. Leyna's mother (played by Abbie Cornish) is German and has fair skin, blonde hair etc but the problem lies with Leyna's father who is black. Leyna and her mother move from their home to Berlin hoping to be lost in the crowd somewhat. Hitler is determined that people such as Leyna should not be allowed to procreate. Leyna's mother visits relatives and asks for help obtaining papers that say Leyna has been sterilised, as if she is caught without these papers she faces being taken away to be sterilised and probably much worse too.  When Leyna is banned from school, she has to work in the same factory as her mother. Despite her mothers warnings not to get involved Leyna ends up falling for Hitler's vision of the perfect German boy Lutz (played by George Mackay), whose father (played by Christopher Ecclestone) is a well known SS Officer. Naturally being the son of an officer and a good German boy Lutz is a member of the Hitler Youth, as is Leyna's younger brother.

Sadly the course of their love is not set to run smoothly with Lutz being called to duty with no chance to tell Leyna. Then the unthinkable happens and Leyna's home is raided, her mother hands over the false papers she has for her daughter and the Officer doesn't even look at them, he simply destroys them, meaning they desperately need more papers for Leyna or she faces being taken by the Germans. Everyone knows that people are being taken and they are never heard of again. Things go from bad to worse for Leyna and her family, first her mother is taken for trying to save her daughter, and then Leyna herself finds herself being transported to a "work camp" concentration camp.

The film portrays the atrocities of the gas chamber, in one particular scene Leyna is say on the ground outside and what looks like snow begins falling and as a viewer for a split second you believe it could be snow, then you realise what it really is floating about in the air. The "star crossed" lovers do see each other again, but tragically it seems they are not meant to be together. Leyna a prisoner in a concentration camp, with Lutz being a prison guard and his father the Commandant. When evidence is produced that shows Lutz's father how much he loves this girl and he hears his son planning a future with her he takes drastic action. It really is awful, but then there were so many horrors going on, and the SS Commandant is looking into the romance from the outside with a cold Nazi indoctrinated heart and mind. Families and friends were pitted against each other by the circumstances they ended up in and by Hitlers new rules and regulations.

It seems wrong to say that I "enjoyed" the film as it covers such an horrific time in history and yes this is a work of fiction but real people went through the same as Leyna & her family. The reason for Leyna to be taken and considered unworthy to live amongst Hitler's ideal Aryan race was the colour of her skin, but there were many different people considered unworthy such as those who were Jewish, disabled, Romany etc. The film really does make you think about all those real lives lost in a period of history some people would prefer to forget.

Both Amandla Stenberg and George Mackay portrayed their roles perfectly and you believed their young love and ended up really wishing their was an easy route out of the hell they both find themselves in. You find yourself wishing so hard for a happy ending for them both. Christopher Ecclestone represented his character of SS Commandent well and showed his internal struggle between performing his duty for his country and his will to protect his son thoroughly. Whilst Abbie Cornish played her character well, she did come across harsh, as a mother in her situation would, I couldn't help disliking her for the way she sometimes treat Leyna. At first I wasn't keen on her, but I think it was more to do with the character she was being than her acting.

I do find myself quite fascinated by this awful era of history, as I enjoy reading, watching and learning of those that survived despite the odds. That managed to hold on to hope, love or their humanity and lived to tell us about those less fortunate who died during the Holocaust.