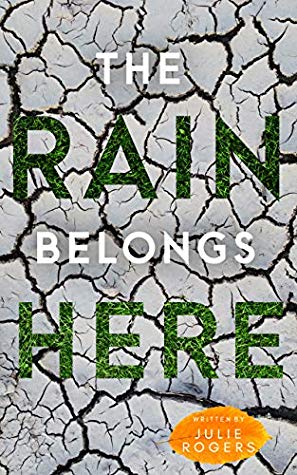 BLURB from Goodreads
If she succeeds in finding him, he’ll be charged with murder. If she fails, he won’t likely survive on his own.It’s 2064. Ana lives in the City, an experimental community that has had little contact with outsiders in decades. When her older brother Finn disappears on her 22nd birthday, a seemingly impossible event given the City’s extensive monitoring, she quits school, moves into her station wagon and embarks on an obsessive manhunt. Unable to find him on her own, she’s forced to partner with Aaron, a detective with his own complicated history and agenda.Together they comb the dregs of the outside world, encountering both the horrors of lawless survivor communities and the unclaimed beauty of the old world. As Ana comes closer to understanding her brother’s disappearance, she’s forced to confront the truth about herself and her place in the City.

REVIEW
After looking at the cover and title, I initially thought that this book would about a drought, the lack of rain and how people coped with that. The whole dry, parched looking cracked earth/mud with just patches of green grass starting to come through. Then the authors name being in a bright orange autumnal leaf design. All great things separately but they kind of led me down the wrong path for what I thought the book was going to be about. However, when you start to think about the deeper plot of the book after reading it, I suppose certain aspects of the cover does represent some sections of the book. The grass could represent the fact those inside the walls that cut themselves off from “the outside” and are beginning to reap the rewards of what they have sown? Yet the dry cracked mud/earth could represent the fact that though those on the inside of the wall are doing okay, they could still use resources that are available outside their perimeter wall. After reading the book, I would say I did enjoy it but still feel a tad confused about the actual relevance of the cover and title of The Rain Belongs Here. I think the cover is really good, it just led me to the wrong conclusion about the book, I was expecting something quite different to the book I read. This genres listed for this book are, Sci-fi, dystopian, and post-apocalyptic which I totally agree with though I would also add futuristic to that list as the book is set in the year 2064.

The main character in the book is Ana and her brother has disappeared, which is unusual as he didn’t give Ana any idea that he may be going anywhere. Even worse is the fact the friends he disappeared with have been found dead. Ana has stopped going to school to concentrate on searching for her brother, Finn.
The government are determined to recruit Ana, to team up with one of their own to go “outside the wall” and bring her brother, Finn back to face charges for the murder of his friends. Ana isn’t getting very far on her own, but has to undergo some special training to make sure she is fit enough for the mission. Ana also has to sign a contract that if anything should happen to her outside of the wall perimeter that they are in no way liable and basically owe her nothing. Ana is placed under the care and instruction of two of their operatives Noah, and Aaron. Both Noah and Aaron are considered somewhat disposable, out of favour with the government and this job is to be considered part of their way to make amends for past misdemeanours.
Ana at first kept faith that Finn was just staying at a friend’s house but she is soon forced to face the fact that Finn has intentionally left the apparent safety on the inside of the wall and disappeared into the wilds of the outside.

The book then tells the story of Aaron and Ana going outside the safety of the perimeter walls to search for Finn. Naturally Ana is wanting to find her brother Finn and prove his innocence whereas Aaron is tasked with the job of finding Finn and returning him to inside the perimeter wall and proving his guilt. Noah, Aaron’s and Noah’s daughter’s future depends on Aaron being successful. It soon becomes clear that Aaron and Ana have growing romantic feelings towards each other despite them having totally different reasons for searching for Finn. In fact, it is so clear that they are on opposing sides that at one point in the book Aaron asks Ana if she plans to hit him over the head, leave him for dead, take all the supplies and search for Finn and join him wherever he is staying. Aaron and Ana visit different pockets of communities that have been created, a commune, an Amish settlement, a woman running an orphanage to learn more about Finn, and what has happened. It seems he has met a woman called Miriam and he is somewhere with her. Then rumours abound that a tribe of people calling themselves the “Band” may have him. It soon becomes apparent that Ana will have to use all her arsenal of training and her brain as well as brawn to gain her brothers freedom from the Band.

I did enjoy the plot of the book, Ana searching for her brother and discovering he is not the same person she thought he was. Some of the things she is told about her brother don’t fit with the Finn she knows and loves. Then there’s how Ana handles things on the “outside” and her possibility of a relationship with Aaron, who genuinely seems to care for her. There’s also lots of interaction between Ana and Aaron and those that are creating their own ways of living and getting by how they can.

There were things that I wasn’t totally keen on such as the start of the book was quite slow for my personal reading taste, and in some area’s the plot just felt a little disjointed. The timeline jumped about a little too much for me. I think it would be an easy thing to fix by perhaps labelling the individual Chapters a little more clearly and a few things tightened up a little. At certain intervals whilst I was reading the book I wasn’t overly looking forward to my “reading time” like I usually do. I did enjoy the book in the end and thought it had an interesting plot and some great characters, such as Ana, Arron, Noah and Hooper. I think how the book ended, it could well read as a standalone, most things seemed to be wrapped up, except for Ana getting to really sit down and talk to Finn, so perhaps that suggests there could be more in the future.

To sum up, the book isn’t the easiest read, and requires you to concentrate on certain details and remember some facts and dates, but is well worth the effort of sticking with it, and reading it until the end. When you remember relevant clues from earlier in the book as you near the end of the book it is quite a satisfying feeling. The whole “Ooo, I wondered if that was the case” or “Ooo, I didn’t see that coming despite that clue”.

**I have since discovered that there is a follow up to The Rain Belongs Here, it is called Hanging City - and yes it will be going on my want to read wish list.**