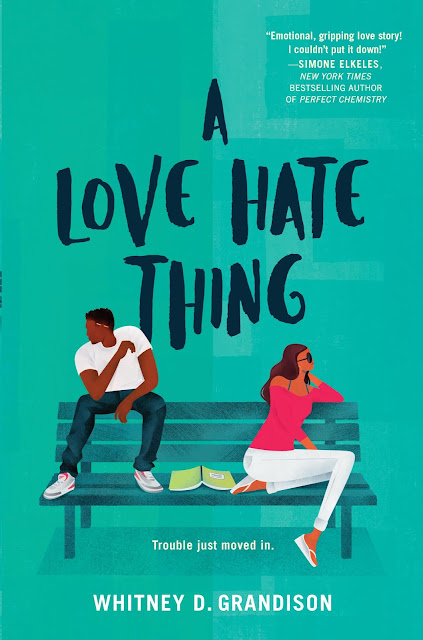 BLURB from Goodreads
A fantastic enemies to lovers romance about an It girl whose world is upended when a boy from the past moves into her house after tragedy strikes. For fans of Ibi Zoboi's Pride, Mary H. K. Choi and Samira Ahmed. Wattpad author Whitney D. Grandison's traditional publishing debut.

When they're stuck under one roof, the house may not be big enough for their hate…or their love

When Tyson Trice finds himself tossed into the affluent coastal community of Pacific Hills, he’s ready for the questions, the stares, and the total feeling of not belonging in the posh suburb. Not that he cares. After recovering from being shot and surviving the mean streets of Lindenwood, he doesn’t care about anyone or anything. He doesn’t even care how the rest of his life will play out.

In Pacific Hills, image is everything. Something that, as the resident golden girl, Nandy Smith knows all too well. She’s spent most of her life building the pristine image that it takes to fit in. After learning that her parents are taking in a former childhood friend, Nandy fears her summer plans, as well as her reputation, will go up in flames. It’s the start of summer vacation and the last thing Nandy needs is some juvenile delinquent from the ’Wood crashing into her world.

Stuck together in close quarters, Trice and Nandy are in for some long summer nights. Only, with the ever-present pull back to the Lindenwood streets, it’ll be a wonder if Trice makes it through this summer at all.


Getting shot isn’t the worst part. It’s the aftermath that really fucks you up.
Six months ago, on a dark December night, I was lying in a pool of my own blood on
the living room floor. Six months later, I was sitting in a car on the way to a new town to start
fresh. In some ways, yeah, the wound had healed. In others, it never would. I didn’t care,
though. The last thing I’d cared about got me where I was.
“You’ll like it there, Tyson. The Smiths have prepared a new home for you,” Misty
from social services was saying as she drove the long stretch of highway toward Pacific
Hills. It was only an hour away from where I used to live in Lindenwood, California.
I didn’t respond. Home was a meaningless word to me now.
Misty peeked at me. “Aren’t you going to say anything?”
“I can leave as soon as I turn eighteen, right?” That was all that mattered. Fuck the
rest. Five months, aka one hundred and sixty days, to go. On November twelfth, I’d be free.
Misty sighed. “Look, I know what you’re going through—”
“Word? You’ve been shot too and all’at?” I glanced her way. This lady was going
home to a million-thread-count sheet-and-pillowcase set, resting easy once I was off her
hands.
Fuck outta here.
“Well, no, but—”
“Then shut up.” I faced the road ahead, done talking.
Misty let out a breath, her light tan skin no doubt holding a blush upon her cheeks.
“Do you kiss your—” She caught herself, as if realizing where she was about to go. “I—I’m
sorry. You just shouldn’t speak that way.”
I felt an ache in my chest, but I let it go.
I didn’t care.
Half a beat later Misty was rambling on about food. “Do you wanna stop and get
something to eat, you must be starving.”
“I told you I wasn’t hungry.”
“Oh, well, are you nervous?”
I hadn’t thought about being nervous or the fact that I would never return home again
and lead a normal life. Not like I’d ever led one to begin with.

“No.”
“Well, good. Think of it as going to a sleepover at an old friend’s house.”
One thing was true, the Smiths were old friends, but this setup was for the next five
months.
“It’s been ten years since I last saw them,” I spoke up. “This ain’t no damn sleepover,
and it’s not about to be all kumbaya, neither.”
At least they were black. Moving into the uppity setting of Pacific Hills was sure to be
hell, but at least I would be with a black family. Even if I wouldn’t exactly fit in.
I didn’t look the same. I didn’t act the same. I wasn’t the same. And I didn’t care.
“Tyson—”
“It’s Trice.” I had asked her to call me that from jump street. No one called me Tyson.
I didn’t want to think about that. I didn’t want to think about anything. I didn’t care.
“Trice, please, try? I know it’s been rough these past few months, but you have a
chance at something fresh. The Smiths are good people, and Pacific Hills is a lovely town.
I’m sure soon you’ll be close to your old self.”
Misty had no clue what she was talking about. My old self? She obviously hadn’t
paid attention to my file, or she would’ve been smart enough to leave it at fresh and not
bring up my past.
Tyson Trice was dead.
He died on the f loor in the living room that day, and he was never coming back.
When I didn’t respond, Misty let up, probably getting that I didn’t give a shit either
way.
I didn’t care. 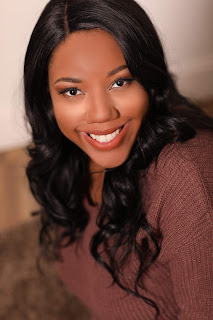 Whitney D. Grandison was born and raised in Akron, Ohio, where she currently resides. A lover of stories since she first picked up a book, it’s no surprise she’s taken to writing her own. Some of her works can be found on Wattpad, one of the largest online story sharing platforms, where she has acquired over 30,000 followers and an audience of over fifteen million dedicated readers.