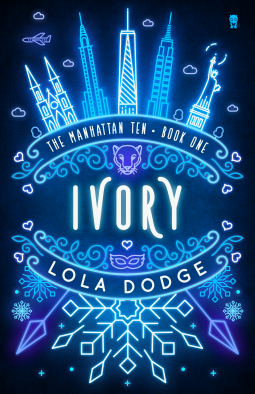 BLURB from Goodreads
An ice princess. A jaguar shifter.She’s a flight attendant who wants nothing to do with super heroes. Hiding her ice powers. Hiding from her family. Hiding is a full-time job, but Ivory can only suppress her inner warrior if she wants to keep the normal life she’s built from nothing.He’s a career hero and a member of the legendary Manhattan Ten. Tall, dark, and shifter, the concrete jungle is his playground. Jag takes nothing seriously until Ivory tempts his inner predator.Can he melt the stone-cold goddess?It’s love at first fight in the first volume of the Manhattan Ten Series.

REVIEW
I should start by explaining that this book has been published before in 2013, but it was bk 2 in the series then. The books have been switched around a little and it is now bk 1 in the Manhattan Series. I’ll be honest normally I would read “super heroes” and scrunch up my nose and think no immediately but the cover of this book really caught my attention enough to make me read the blurb and in turn interested in reading the book.  I really love the cover in the neon-esque ice blue writing on the midnight blue background. Then with the Manhattan skyline at the top of the book, the jaguar head to represent Jag and the masquerade mask that symbolise the fact Valdis is in hiding at the beginning of the story. Then of course there’s the snowflake and ice spears that characterise Valdis.

At the beginning of the novella length story, Valdis or Val as her colleagues call her is working as an air stewardess, as she has been doing for quite some time. Today is only slightly different as the air craft is so hot which is causing the passengers to overheat and become more irritable than usual. It seems the more elite passenger in first class are wanting more attention and Val is moved up to offer help to the stewardess already there.

When Val is attacked which puts both her life and those on the plane’s lives in danger her cool façade and determination to hide what she truly is slips and she automatically takes her assailant down. There’s a mixture of shock, horror and gratitude from the passengers. Val is devastated as she had worked hard to remain off the radar. She had run away from her tribe and their way of life and wanted to fit in with normal society, and now it would all have been for nothing. There would be reporters, and meetings with the authorities, and maybe even people from her tribe sent to kill her now they knew where she was! Then along comes Jag, a “hot in the handsome sense” guy who says he is from the Manhattan Ten and they can help and protect Val.

Of course, there is much more to tell, Val the super heroes is renamed Ivory by the press and the name seems to be sticking. Then there’s the hot and cold relationship between Ivory and Jag.
We also learn more about what the Manhattan Ten do and in this novella, they are trying to track down a man or group intent on killing those with super hero powers of any sort. We are also briefly introduced to the other members in the Manhattan Ten. The leader is Tank, the organiser of the group is Angel, and there is the super-fast Jet.

I felt quickly pulled into the novella, wanting to know who Val/Ivory was hiding from and why. I immediately fell in love with the lovable, Jag even though he is a dangerous animal when he shifts. Jag is so laid back, yet at the same time gives off such a tough guy image. Yet he shows a softer, perhaps more vulnerable side when with Ivory. I also adored the banter between Jag and Ivory. It was kind of sweet how quickly Jag became so possessive over the woman he had just met on a plane, though took a while to realise that his animal side that was claiming her too.
I thought the mixture of kick ass tough female crossed with the vulnerability of not wanting to hurt anyone around her made Ivory a complex, interesting and lovable character. I think there is a great mix of characters and am looking forward to reading much more of this series. I am particularly looking forward to learning more about both Tank and Angel.

I should point out due to certain language and content I would agree with the categorisation of the book being 18+ Adult fiction. Don’t think all the super heroes are shifters though as they are not, they have different powers.

My immediate thoughts upon finishing the novella were that I really did enjoy reading this one and am looking forward to reading more of this potentially great series.

To sum up super heroes aren't what I would usually choose to read, but the cover (the new ink monster version) initially caught my eye and I fancied reading something a little different and I have to say I really enjoyed reading it. I will be looking out for the rest of the series being released as I definitely want to read more!