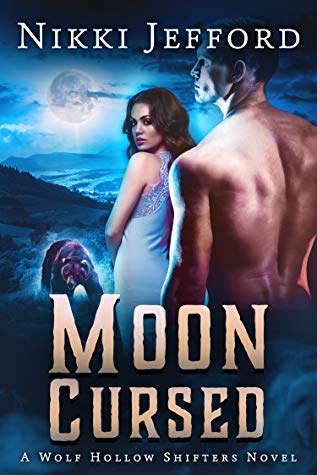 BLURB from Goodreads
Time is running out for Elsie.Elsie's coven always believed that she was moon cursed. Promised to the bear shifters before she was ever born, the witch wolf shifter has until her twentieth birthday to outsmart Brutus, her would-be mate who only wants her as payback.To save his coven, her father made a terrible, magically binding agreement decades ago, never dreaming he'd have children, especially not powerful wolf shifters. Luckily, he never specified what type of shifter Elsie must claim.Zackary doesn't believe he deserves love or forgiveness.Ever since he betrayed a packmate, Zackary has been making up for his sins. No matter what, he knows the truth. Once a mongrel, always a mongrel—just like his father always told him. Now the mad wolf has returned to torment Zackary and the pack.Not one to be scared off, Elsie, the sweetest and loveliest of all females, refuses to believe he's no good for anyone—especially her.Fated mates or doomed lovers?Zackary and Elsie never knew how strong their love would grow … until they're in too deep.Zackary betrayed Elsie's brother once before. If the wizard shifter knew what he was doing with Elsie in private, Tabor would kill, maim, or use that dick shrinkage spell he once threatened him with.With a meddlesome ex from her coven, who won't let go, and a brute of a bear shifter intent on trapping her inside his cave forever, it will take more than magic to save Elsie from her curse.Do these star-crossed lovers stand a chance?

REVIEW
Having read all the Wolf Hollow Shifter series books so far, I knew I had to read this one as soon as I knew it was available! I instantly loved the colour, knowing it was half witch/half shifter Elsie along with the proud stature of the male that is Zachary who we have already met in the previous books. There is also the bear in the background on the cover, lumbering about waiting for Elsie!

In this book we start out at Balmar Heights within the witch community, where Elsie was returned when her half-brother Tabor sent her when there was danger in Wolf Hollow. Elsie is seriously missing the way of life in Wolf Hollow along with all the friends she has made, and of course the wolf shifter she has had her eye on too. Elsie is also becoming sick and tired of her ex-boyfriend William who is always hovering around her, knowing about her curse and coming up with schemes to get her back. Elsie’s time to find a mate is rapidly lessening, she has until her next birthday.

Finally, Elsie is allowed to return to Wolf Hollow, after a discussion with her father reminding her that the curse stated she had to be mated to a shifter, not the specific bear shifter that the bear clan think. It seems when the trade/promise was made Elsie’s father Lazarus had made sure there was a tiny loophole within it. So long as Elsie claims a mate before her next birthday, she would be safe from the curse and not end up with the brute of a bear aptly named Brutus. Of course, Elsie knows the exact wolf shifter she wants as her mate. The only problem is her half-brother, Tabor would never agree to them being mates as due to things that happened in the past between him and Zachary. In fact, Zachary has been banned from taking a mate, though Elsie doesn’t see that as much of a problem, she will gladly appeal for that ban to be lifted. Tabor does not know about the curse hanging over Elsie and she would rather it stay that way. She doesn’t want the curse to become common knowledge as then perhaps people will think she is only choosing a shifter from Wolf Hollow to avoid the curse and that is not the case. Elsie does have real feelings and affection for Zachary, despite his bad history with her half-brother.
Elsie gladly returns to Wolf Hollow and things seem to be developing nicely and with plenty of time between her and Zachary until he joins her brother Tabor and his pregnant mate Sasha to hunt down a rabid wolf, Vallen, who also happens to be Zachary’s abusive father. Will Zachary be back in time for Elsie to progress their relationship enough that they can either approach her half brother Tabor about them becoming mates? or for them to secretly claim each other and then reveal what they have done?

Of course, I adored the two main characters, Elsie and Zachary. Elsie may be small in stature, but she sure makes up for her size with attitude. Elsie is very strong willed, and when she wants something and sets her mind on it, no one can dissuade her. Elsie is rather conniving in the way she swapped patrol partners with different people to make sure she got to work picking berries with Zachary. She shamelessly flirts with him and ends up having to become more and more obvious about the fact she wants him as her mate and she wants him to claim her sooner rather than later.
Zachary, bless him, doesn’t quite know what’s hit him. He is a large, strong, hard working guy around Wolf Hollow often doing more than his share of the work when put to work with his two best friends Wiley and Justin. The relationship between Zachary, Wiley and Justin is so comical, especially when they have been drinking Wolf Hollow moonshine. Wiley and Justin enjoy winding Zachary up, asking when he is going to approach Tabor about his intentions with Elsie, saying Tabor would rather kill him etc. Then on the other hand both Wiley and Justin welcome Elsie to their log where they eat their meals with Zachary. In fact, they think Zachary and Elsie getting together could be good for them as the other females in the tribe may come over and speak to Elsie meaning they will get to talk to the females more too.

The character I enjoyed disliking the most was Brutus the bear shifter who is determined to carry out the curse Elsie to himself. Brutus does not want to mate with Elsie, does not have any affection for her at all, he merely wants to cause as much hurt and distress to Elise’s father Lazarus. Brutus plans to quite literally chain Elsie to him and turn her into his slave, housekeeper. Brutus is very bitter about the fact Lazarus took some of the bear shifter land to form Balmar Heights so the curse is all about revenge to him. He makes his feelings quite clear that he doesn’t like Elsie and never will, to him she just represents payback.
There are also a couple of new wolf shifters introduced in this book. They are brothers Diego and Raphael who are nomadic pureblood shifters. We learn more about what makes purebloods and their offspring different from other shifters and their offspring. The brothers seem totally committed to continuing to travel, even when the elders at Wolf Hollow pull out all the stops in an attempt to get them to consider mating a Wolf Hollow female and becoming [art of the Wolf Hollow Pack. To begin with I really disliked the two brothers and wondered if either or both of them would interfere in the course of Zachary and Elsie’s possible relationship and future. Then as I read more it seems that Raphael doesn’t wish to settle down with a female whether she is a pureblood or not, he is perfectly happy with sleeping around with lots of women. Diego on the other hand is looking for a pureblood female wolf to claim and mate with and create their own travelling pack. Sasha explains that the closest female pureblood is in the next pack across from Wolf Hollow, and a message is sent to her to ask if she would like to meet the newcomers. There’s a kind of magic around Wolf Hollow though, and things don’t always work out as you think they may so the brothers are soon experiencing doubts about their original plans. By the end of the book I did kind of like the two new wolf shifters Diego and Raphael and am looking forward to the possible clashes and conflict ahead with them. The men so obviously consider themselves tough, alpha males and that females should do whatever their bidding is, but I think they may be re-educated in the forthcoming books!

I started reading this book with the intention of reading just the one chapter, but ended up reading three chapters despite it being late at night. I finally went to sleep that night plotting alongside the main character of Elise, wondering how things could possibly work out for her. The whole Zachary problem of not being able to claim a mate, I was plotting, thinking maybe there was a way round his mate ban. Maybe if Elise claimed him? Or Tabor spoke up for them as a couple? Or would Elsie and Zachary move to a different pack or even runaway together.  Then my second and final reading session went late or rather into the early hours of the morning. This book is highly addictive reading! You have been warned! Honestly there is always something interesting happening in this book. There’s the whole main plot of Elsie and the curse, then rabid wolves attacking, new wolves travelling through the area, pregnancies for some of our favourite characters, catching up with wolves we have met in previous books. Then the dealing with the rabid wolf goes awry and causes other problems, meaning hastily called meetings and sentences doled out along with massive changes for one character in particular! I am seriously looking forward to how those changes work out for that certain character and his mate. I honestly loved reading this book, it was amazing from beginning to end. After reading the authors note at the end of Moon Cursed, I know that there are book books to come in the future so I am really, really looking forward to more. The Wolf Hollow series fits my cravings to read the shifter genre perfectly. I am already pining and eagerly anticipating the next book.

My immediate thoughts upon finishing this book were that I absolutely loved this latest addition in the Wolf Hollow Shifters. Moon Cursed has amazing, adorable characters. We catch up with older characters such as Wolfrik, and Kallie as well as well as meeting new male characters Raphael, Diego and Brutus. This book centres on Elsie, half wolf, half witch, sister of wizard/wolf Tabor. Elsie needs to claim a shifter mate before she becomes 20 yrs old, and she knows exactly which wolf shifter she wants!

To sum up, what can I say, Moon Cursed is an amazing book, with lots of fantastic plot lines running through it and clues near the end of it at the fun and awesomeness yet to come. I am honestly chuckling about the possible taking down of a certain arrogant wolf shifter by his possible future mate.