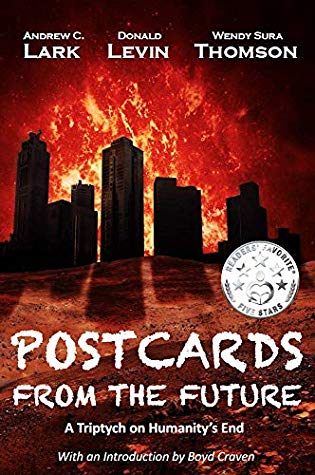 BLURB from Goodreads
Three innovative authors imagine the end of humanity. Postcards From the Future is the remarkable result.Andrew Lark’s “Pollen” is a riveting, multiple point-of-view account of a strange atmospheric phenomenon that destroys humankind’s ability to reproduce, ushering in the extinction of our species.Donald Levin’s “The Bright and Darkened Lands of the Earth” is a gripping tale set in a desperate, post-apocalyptic future where a heroic woman battles ecological and social collapse in an effort to save her tribe—and humanity—from certain annihilation.Wendy Sura Thomson’s “Silo Six” is a suspenseful story of love and survival set far into the future, when the sun begins its transformation into a red giant and scorches the earth into a virtually uninhabitable cinder.

I enjoy this type of book with multiple authors, for the same reason I gravitate towards anthologies. They are a great way to try different authors without committing to reading a full-length book.
I know the cover features high rise buildings but for some reason it also rally made me think of Stonehenge. The buildings look very stark against a turbulent looking orange flamed burning sky.

The book has three stories in it, Pollen by Andrew Charles Lark, The Bright And Darkened Land by Donald Levin and Silo Six by Wendy Sura Thomson.

First up is Pollen by Andrew Charles Lark. I’ll be totally honest I wasn’t keen on this one at all, it was quite slow pace which I just couldn’t get on with. The “big” disaster is an atmospheric change that destroys the reproductive systems of humans. The book was told from too many points of view for me, it felt like it was jumping about too much. The basic story was okay but it felt really stretched out. The whole “Pollen” happening reminded me of something similar featured in another book series where it was referred to as the “rapture” which reminded me of Rachel Vincent's Menagerie Series and what she called 'The Rapture' within that book.
This story is set out as diary entries, finding it harder going than I thought I would. It jumps about a bit too much to different individual characters stories. Hopefully it will get better I kind of feel it would be better to have all one characters stories or even bigger chunks of their diary entries. I got the whole devastation of this pollen happening, I just felt like I didn’t care enough about the characters, the book didn’t make me attached to them enough. The book tells you what the character of Matthew is doing, rather than the book following what he is doing as he is doing it. I almost ended up giving the whole book a DNF (did not finish) about a third of the way through this first story!

Next is The Bright And Darkened Land by Donald Levin. From the blurb I wasn’t so sure I would get along with this story but I found I really did enjoy it and felt disappointed when it ended. It seriously left me wanting more!
This one had me hooked instantly, I liked the world building and almost immediately grew attached to the characters of Ash, Mae and Odile. In this book the climate has changed forcing the group of women who make up the main characters of the book to live underground. There has also been a purge where the majority of books have been destroyed. At first the way the characters had their own way of speaking irritated me but it quickly grew on me as I became more engrossed in the plot. Ash is a Venger (scavenger), who goes above ground looking for items that would be useful to her tribe. The chief elder of the tribe is Odile, though there is subordination in the ranks and when Odile sends Ash on a mission to find a book that the council said wasn’t worth the risk, she is thrown in a prison pen, but even worse for her she finds out on of her fellow council members has been banished to certain death. I ended up loving the quirks of the women’s language such as, “drag up soon” meaning “die soon”. I also found the idea of the history of the tribe being passed on to the younger generations of the tribe by the “singer”. The men in the book are referred to as “ragged men” and were often badly burnt from their insistence of living and travelling around above ground. The only use these men had to the tribe of women were to breed with, and that was only done as a necessity to keep their tribe going for the future.
As you can probably tell, I really adored the characters of Ash, Chief Elder/Singer Odile and council member Mae. Whilst I enjoyed disliking the trouble making council member Ells who is clearly jealous of Odile, and probably Ash too. I would certainly read more about this society, landscape and world if there were more books as I really enjoyed it a lot.

The final story is Silo Six by Wendy Sura Thomson, this one surprised me as truthfully, I may not have ever given this one a go as I don’t normally like the “outer space” genre that this one kind of falls into. This book is very futuristic again it’s characters cannot venture outside as the radiation that is in the air would kill them. Though other races later in the book can go outdoors with protective clothing and some take special anti-radiation medication. The two main characters that the story follows are Bailey and her husband Ephraim. We meet Bailey first who wakes up and begins her morning routine of checking her information screen, which tells her the amount of food rations, the head count for those in the community, then states if there was a change in this from the day before. It also goes on to tell her the interior air quality, when the next food& medicine stock is due along with the radiation index and sunspot activity. Once the information gets to the end it repeats over and over again. Everything in this world is measured out and controlled. You stand in line and are given your food. You have to do a certain amount of exercise and work to earn your credits for your food. You also have to pass regular medicals too. Bailey & Ephraim decide they want to begin trying to have a child so they have to apply and have to pay a certain amount of credits for the privilege. They are also moved to a different living station were couples staring a family, or those with families live. In fact, it is when they are at the new station that they realise all is not what it seems. At the family station the computers are constantly interrupted so food stations stop working and they end up confined to their pods for longer.
It surprised me that I really enjoyed this story, and wanted it to slow down and not end. I wanted to know more about the world, meet more of the characters. I wanted to learn about those in the higher positions that were making all the decisions. I would certainly love to read more stories in this setting. I think I ended up loving this one the most and found it the easiest of the three stories to read. It flowed so well and had you on the edge of your seat a quite a few times.

To sum up as a whole I would have to say I did enjoy this story collection. I enjoyed the world building and reading about the different societies and how they managed to continue on living despite nature seeming to be set against them at every turn. I have taken a look at the authors different books but they don’t seem to have written anything else set in the same worlds as they have in this collection which is a shame.