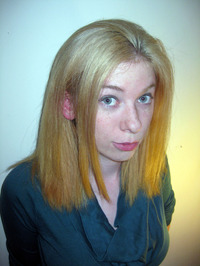 What is your name, where were you born and where do you live now?
My name is Katherine McIntyre and I’ve always lived in the suburbs of Philadelphia.

Did you always want to be a writer? If not what did you want to be?
When I was younger, I always wanted to be a writer and an artist. Eventually that waned down to just writer, but I’ve always read voraciously and wrote just as much.

Do you work another job as well as your writing work?
I work as a massage therapist.

Who is your publisher?
Hazardous Press

How long does it usually take you to write a book, from the original idea to finishing writing it?
I can usually sit down and write a book in a couple months. Editing though…that’s a different beast.

What can we expect from you in the future?
I’m currently working on a young adult science fiction and an adult fantasy.  Sticking to similar genres.

What made you decide to write that genre of book?
I’ve gone to several steampunk events and am quite taken with the sub-genre. However, I also have and will always love pirates, so the two meshed quite nicely.

If you had to choose to be one of your characters in your book/books which would you be? and why?
I would be Bea. She’s got a ridiculously exciting life, but also a really freeing on. Plus, her support system aboard the Desire is solid.

How long have you been writing? And who or what inspired you to write?
I’ve probably been writing as long as I could read. I have thousands of pages of old poems, short stories and story concepts I wrote when I was a kid. I started writing my first manuscript at eighteen and kept rolling from there, trying to improve my craft, my plots, etc. As for who inspired me to write, I’d probably say my dad. He used to tell us stories when we were kids and when you’re around that much imagination, it’s infectious. Plus, my mom always read us books too, so my brother and I had a lot of stories as a child. We both read a ton. My family’s incredibly supportive and they have been behind me the entire way, even suffering through my earlier writing.

Do you have a certain routine you have for writing? ie You listen to music, sit in a certain chair?
I write anywhere. I tend to produce the most when I’m typing away while listening to music, but sometimes I take a notebook outside and sit in the grass and write, sometimes I jot down sections on scrap paper when I’m out or at work.

Do you have anybody read your books before you officially release them?
My husband is the best reader imaginable. I usually give my manuscript to him when I’m still editing and he’ll turn around and give some of the most insightful critiques I’ve ever had, beta-readers included. And I’ve let a couple of friends and also family take a look at it before I start sending it out, so I can get last minute critiques.

Do you gift books to readers to do reviews?
I offer a free review copy, yes. I think review blogs provide an indispensable service to the reading community and to authors.

Would you ever ask a reviewer to change their review if it was not all positive about your book/books?
Never. A review is someone else’s take on the work. Even if they hated the book or it wasn’t their style, that’s their own view and the author has no right to try and interfere with that.

Do you decide on character traits (ie shy, quiet, tomboy girl) before writing the whole book or as you go along?
A lot of times I choose things as I go along. I write in the moment and then add a lot of the characterization and finesse in the edits. Letting the character naturally unfold has worked for me since based on the way the character handles the stuff thrown at them, they set apart their characteristics on their own.

Do you basic plot/plan for your book, before you actually begin writing it out? Or do you let the writing flow and see where it takes the story?
Usually I start with a basic idea and then write the first couple chapters. Once I can see the tone, I can better determine the direction, although I usually know how my story will end from the beginning. Once the beginning’s established I write a loose plot to follow.

What do you think makes a book a really good/bestseller ? Simply?
Enjoyment. My take as an avid reader is that you could have a phenomenally written book, but if I don’t like the plot or characters, there goes my interest in reading it. I think a good book is one you enjoy, one you don’t want to put down. Anything that lets you escape for awhile and adventure into another world or someone else’s mind.

Have you ever suffered from a "writer's block"? What did you do to get past the "block"?
I sometimes will sit down to write and have a hard time putting words to the page. I write anyway. If I don’t write as much that day, I don’t, but it’s a discipline and if I wait for some magical muse, I’d never get as much done as I do.

What do you do to unwind and relax? Do you have a hobby?
Hah, I write to relax. But when I take my breaks I’ll play a video game, or read. And then I usually get inspired and want to write again.

Have you ever based characters on people you know or based events on things that have happened to you?
Earlier manuscripts that I wrote were heavily based around people I’ve known and things I’ve done. While I moved away from that, I think there are always elements of what we know and who we are that come out in our writing. Bea in “An Airship Named Desire” is way more adventurous than I am in real life, but more importantly, I think she experiences the excitement I crave and I can live it through her.

Is there a certain Author that influenced you in writing?
Pretty much everything I’ve read and loved has inspired me or influenced my writing. That being said, I have a lot of respect for Jim Butcher’s writing, not only because of how he balances elements of his books, but also because of the sheer volume of works he produces.

Which format of book do you prefer, ebook,hardback, or paperback?
Hardback is my least favorite. They are so unwieldy (not good to carry in purses) and expensive. There’s still something amazing about paperback and holding the book in your hands, but to be honest, I love ebook as well. The overall convenience is just fantastic.

Do you think books transfer to movies well? Which is you favourite/worst  book to movie transfer?
I think it takes good screenwriting and understanding of the medium to transfer books to movies well. The best adaptation I’ve seen has been Game of Thrones on television, but the best example of how different mediums require different approaches is Coraline. Neil Gaiman was directly involved in the screenwriting and it shows. He adds an entirely new character into the movie because all of the internal monologue doesn’t hold up as well in a movie, which is a highly visual format.

What are you currently reading? Are you enjoying it? What format is it?(ebook, hardback or paperback)
I’m currently reading Captain’s Fury, the fourth in the Codex of Alera series in ebook format. Although, only a couple days ago I finished A Hidden Fire, by Elizabeth Hunter. Absolutely fantastic.

Do you think children at schools these days are encouraged enough to read? and/or do Imaginative writing?
I think in schools there’s a flaw in how reading is presented. There are lots of books that have to be read, ones that are outdated and in an archaic language that’s not readily digestible for kids. I think it creates this atmosphere that reading isn’t fun, it’s a chore. While kids end up enjoying some of the books, I feel like there should be more of a choice on the kid’s part as to what they read. Even if it’s a rollicking adventure through outer space, you can still learn valuable lessons through reading the book.
Where can readers follow you?