COVER REVEAL - DEADLY TO LOVE - THE ELEMENTALS BY MIA HODDELL 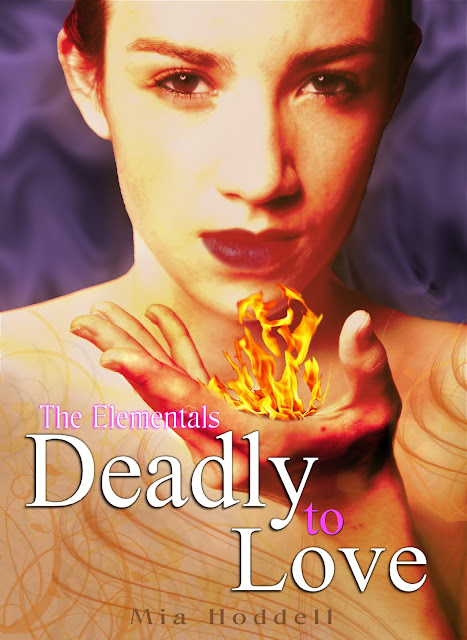 BLURB from the Author
There is a love that is so dangerous, so powerful, so intoxicating that it embraces your heart and smothers your mind until it leaves you defenceless.
Serena knew that but still, it didn't stop her. His name was Kai. He was the most beautiful, irresistible man she had ever encountered. Their attraction was too compelling to fight and she knew she would go to the end of the world beside him. That is love.However behind the allure was hidden a deadly secret – a secret that threatened her fragile life... But secrets best left unsaid never remain hidden forever. When Kai reveals his true identity, she is exposed to a frightening world she had no idea existed. Controlled by powerful Elemental forces her life is placed in mortal danger.Unbeknown to them, their lives have been entwined from the beginning and it leads her to discover an even greater secret about who she really is. As the pieces begin to unravel and death becomes a reality, Serena is forced to decide what is more important...her love or life.

With the cover reveal of Deadly to Love (The Elementals) now arrived and the release coming soon Mia thought she would give you all a sneak preview from her book that hints about what the Elementals are like!

You will have to wait though to find out what form they take, what they do, what they look like and how they act though...

The book will be released on Amazon Kindle on the 28th of November!

MY OPINION ON THE COVER
Hmm I think this is one of those covers that will really grow on you the more you see it. There is a young lady on the front cover who is quite literally holding fire! I do like the cover, it is attractive. The font is really bold to the eye and would draw you to the book. I aren't so keen on the pink on it, I think purple would have been more eye-catching and would have co-ordinated with the purple in the background behind the girl. I love the varying sizes of the fonts and the Authors name on the cover. The one thing I am not keen on about the girl is her lips, they do not look natural, but that could perhaps be partly due to the fact I have put the cover as large as I can to enable readers/myself to have a good look at it.
So on the whole, Would the cover attract me enough to get me to pick up the book? Yes it would make me curious enough to pick it up and read the blurb.
Then there's the blurb which of course then goes on to make you want to read the book.
Posted by Jeanz xx at 01:30