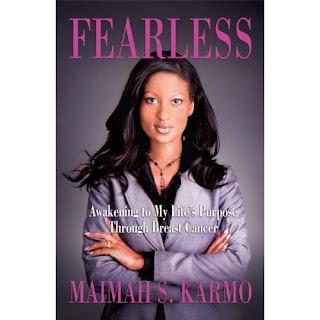 When Oprah tells you to write a book, do so
Breast cancer survivor, advocate and founder of The Tigerlily Foundation shares her remarkable story
WASHINGTON, DC – When Oprah tells you to write a book, you listen.
Maimah Karmo, a Liberian refugee and young mother of a toddler, was 32 when she received her breast cancer diagnosis. She was also engaged at the time.  Her  fiancé walked away days after her surgery.  Maimah's world turned upside-down, but instead of letting her disease overcome her, Maimah turned her plight into action.
Maimah is the founder of the Tigerlily Foundation, an organization that educates, empowers and advocates for young women affected by breast cancer. The idea was born after her second chemotherapy treatment, and when she appeared on The Oprah Winfrey Show to tell her story, Oprah's advice was emphatic: Maimah must write a book.
So Maimah did. Fearless: Awakening to My Life's Purpose Through Breast Cancer (Brown Books, October 2012) is about "my transformation," says Maimah, "and how I learned that a challenge can be a gift."
Fearless is a stunning account of Maimah's upbringing in Liberia—which was uprooted when she was 15 years old, and her family was forced to flee to the U.S.—to living the American Dream, watching it all fall apart with a breast cancer diagnosis, and ultimately, bouncing back. Today, Maimah has made her mark in the world of breast cancer, and her work has been celebrated everywhere from Redbook Magazine to ­­­­Good Morning America.
"I am dedicated to changing the breast cancer landscape and creating a legacy of a world free of breast cancer," says Maimah.
In 2009, L'Oreal's Paris Woman of Worth chose Maimah as a recipient of their Award, and the Congressional Black Caucus Leadership in Advocacy awarded Maimah in 2011 for her advocacy. She and the Tigerlily Foundation have been profiled in numerous national outlets: O, the Oprah Magazine, Essence, Ladies Home Journal, Cosmopolitan, Seventeen, Good Housekeeping, Harper’s Bazaar, Marie Claire, and Redbook. She has also appeared on national television media, including The Oprah Winfrey Show, Good Morning America, FOX, ABC News, and CBS.
"The morning my life changed, I made a vow to live as loudly as possible. I would jump into the things that made me afraid; I would risk everything to feel, to live and to love. Most of all, I would be fully present in life and give of myself so that others may have the incredible joy I feel every day of my life," says Maimah.