DIARY OF A VAMPIRE STRIPPER BY CINSEARAE SANTIAGO 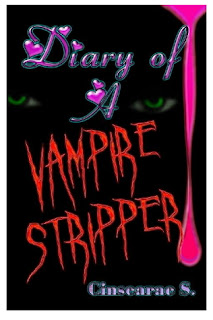 
BLURB from Goodreads
Her best friend is a werewolf. Her boyfriend is a ghoul. And she really, REALLY can’t stand her vampire husband.Trying to juggle college tuition and rent, young Audra Perez seeks a fast fix to her financial woes by auditioning as a stripper for the Hoochie Coochie Club. What she didn’t expect was to actually be chosen! Barely a few months into her new job, she becomes acquainted with a mysterious, distinguished gentleman by the name of Darren Von Eldon, and they secretly begin dating against club rules. Then one passionate night at his beach house changes Audra’s life forever.Now as a newly-awakened vampire, this only adds to her day-to-day mundane burdens. Refusing to drain humans, she hunts birds for nourishment, and finagles a way to avoid going to classes during the day. But bigger problems loom ahead. Radical cops that know about her kind roam the night, seeking to destroy any and all ‘monsters’, and her best friend’s family has a bone to pick with Audra’s. Headless bodies are turning up on vamp and were turf, each side blaming the other for the murders. It’s up to Audra and her friend Lu to figure out who’s doing the killings, and their search leads them beneath the city streets to encounter an abomination neither one of them will ever forget.And the relationship issues? Well, it’s not easy dealing with a boyfriend and a vampire husband, so let’s not even go there…


MY REVIEW
I didn't really know quite what to expect from this book cover, I initially thought it could possibly be a bit bloodthirsty and perhaps very gory but it isn't like that at all. Having said that I do quite like the cover. Obviously this is a vampire genre book, the title tells you that but what it doesn't tell you is it is so much more. The style of the book is a kind of the diary of Audra. I try not to give spoilers in my reviews but will mention things that are already mentioned in the blurb, so here goes... Audra is short of cash and basically getting desperate so ends up at a strip club looking for work. Audra has to choose an alter ego as you don't want the type of guy that goes to a strip joint to know your real name. So Audra chooses Claudia I'll leave you to read the explanation of why in the book! The book is Audra's story, she is turned into a vampire though she is never asked if she wishes to be. the book tells of Audra coping with being a new vampire, and her learning about other races such as weres. Audra also has to quickly learn about Vampire and Were politics. Audra joins forces with a fellow stripper Lu, to try and solve the murders that the vamps and were are blaming on each other before an all out war is started. Do they suceed I hear you ask? You'll have to read the book. There's humour, suspense, murder, a bit of gore, danger and some romance too in this story. As if an impending Were/Vamp war was not enough danger there is also a group who want to kill all supernatural beings to contend with.
*WARNING there are sexual explicit scenes in this book that are not suitable for young teens, the scenes are very descriptive* So having said that it is not my usual type of book, I tend to steer away from  the sexually explicit scene books, as I find it spoils the overall book. This book was not totally spoiled by it, the scenes were done as a natural part of the story. I would say it would not be classed as erotic. I don't read erotic by choice.
So did I enjoy the book? Yes Would I recommend? Yes to adult fans of Mary Janice Davidson, and Dakota Cassidy fans perhaps. Would I read more in this series? Yes I would I want to know what happens to Paul (you'll get what I mean when you read the book) and of course there's plenty more scope for the story too. So YES! Would I read more by Cinsearae Santiago? I think I would Yes!