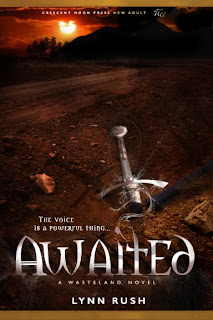 What do you think about book trailers?
LOVE them. I think they’re so fun! And I just so happen to have one for AWAITED. Come check it out. http://youtu.be/p5J4tUul-FY

Do you basic plot/plan for your book, before you actually begin writing it out? Or do you let the writing flow and see where it takes the story?
I’m a seat of the pants writer for sure. The most planning I ever do is a Mind Map, which is just a brain storm of ideas. And then, sometimes, I’ll hop on my road bike and pound out a few miles while churning things around in my head. But that’s the most I’ll ever do as far as planning.
My newest work in progress (WIP) didn’t even get that. One day I was sitting on my couch and an opening scene popped into my head like a little movie snippet. So I started writing—and I didn’t stop for 90,000 words. Heck, I don’t even have all the characters names…they’re just blank lines throughout the rough draft. So, I just go with it. However the story speaks to me during that first rough (and I mean ROUGH) draft, I let it flow. It makes for a lot of clean up time during editing, but that’s okay. It works for me so far.

Are there any New Authors you are interested in for us to watch out for? and Why should we watch out for them?
You bet. Sasha Summers—she wrote Medusa, A Love Story. AWESOME story…such a unique twist on Medusa. Yep, Medusa!!  Never would have pictured her having a LOVE story!
Tara Fuller is another one to watch for. I read her Perigee Moon and it was AWESOME! Love her writing. The story is so intriguing I read that in just a few sittings if I remember correctly!
And I can’t forget Kate Evangelista! She wrote TASTE…it’s a neat twist on Zombies. VERY good book!
There are more out there, but those are a few who come to mind.

Do you or would you ever use a pen name?
Yep. And there’s an awesome story behind that. My mother-in-law was named Lynn. She was a great writer. Never published or anything, but boy, she could write. I first learned of her talent at my wedding of all places!!! She wrote this beautiful piece and read it in front of the whole congregation.
There was NOT a dry eye in the house. She was amazing. So, when I got this crazy notion to write a novel, she was the first to read it. Heck, besides my hubby, she was the first to know I’d written a book.
After she got over the initial shock, she read it. While it was a horrible piece (I didn’t even know what point of view meant back then) she was so encouraging. Mostly encouraging me to learn the craft, but she still lifted me up. Gave me hope.
In the very beginning of my writing, I was advised to take a pen name since my given name was pretty difficult to spell and say. So, when considering names Lynn came up right away because it was my mother in law’s name.
Little did I know cancer would take her from us within a few years of that decision to take her name as mine. So I’m proud to be her namesake. She lives on in every single novel I write because she’s on the front cover and in the dedication.