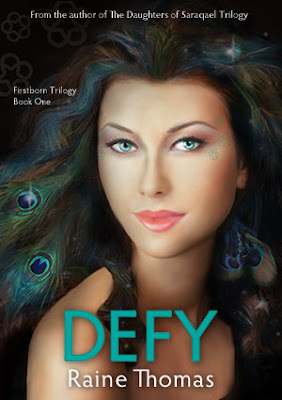 
Seventeen-year-old Tate is about to make her parents’ dreams come true. Unfortunately for her, their dreams foretell her death.Eager to explore more of the Estilorian plane and prove her abilities, Tate goes against her parents’ wishes and leaves the area of protection surrounding her home. Her choice puts her on a deadly path…one that leaves her alone, severely injured and battling for her life.Her possible savior arrives in the form of Zachariah, a male who has removed himself from Estilorian society for more than fifty years. Fighting an unexpected connection to Tate, he must decide whether saving her life is worth destroying his.As Tate struggles to find a way home, she ends up drawn into a dark Mercesti plot involving multiple murders and a powerful ancient artifact. With the unpredictable Zachariah as her only source for aid, she’ll soon find out if her abilities are strong enough to help her defy her Fate.


My initial reaction when approaching this book was trepidation, as its a sister series to the Daughters of Saraqael, I thought maybe I would have to have read that series first. Then I saw the Glossary at the beginning of the book and thought "oh no I will never remember all these facts when reading the book" but I was pleasantly surprised as you don't really need lots of those facts retained as everything is explained in the actual book as the story progresses.
I loved all the characters, the unrequited love between Sophia and Quincy, the sibling love and rivalry between Tate and Tiege, as well as the brotherly/sisterly love between all the cousins. It is a believable story too, you believe that Tate's character would sneak off even though she was told not to.
I enjoyed how the story unfolded and was told from more than one perspective, it flowed brilliantly.
The ending is left in such away that we know that there is much more to come...and that's a great thing too.
So did I enjoy the book? YES Would I recommend it? YES Would I read more by Raine Thomas and more of this series? Yes I plan on reading the Daughters Of Saraqael Series and if I had book 2 of the Firstborn Series I would read it right now!
So don't just put it on your wishlists put it on your buy it list!