JOURNEY ACROSS THE FOUR SEAS; A CHINESE WOMAN'S SEARCH FOR HOME BY VERONICA LI 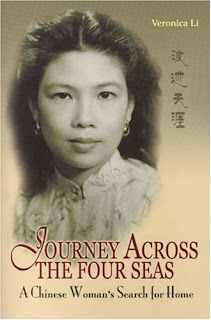 
This is a true and touching story of one Chinese woman's search for a home.  It is also an inspiring book about human yearning for a better life. To escape poverty, Flora Li fought her way through the education system and became one of the few women to get into the prestigious Hong Kong University. When the Japanese invaded, she fled to unoccupied China, where she met her future husband, the son of China¡¦s finance minister (later deputy prime minister).

She thought she had found the ideal husband, but soon discovered that he suffered from emotional disorders caused by family conflicts and the wars he had grown up in. Whenever he had a breakdown, Flora would move the family to another city, from Shanghai to Nanking to Hong Kong to Bangkok to Taipei and finally across the four seas to the U.S. Throughout her migrations, Flora kept her sight on one goal¡Xproviding her children with the best possible education.
MY REVIEW
Veronica e-mailed me to request that I read and review this book, and I have to say a large Thankyou to Veronica because I thoroughly enjoyed reading this account of her families life and how the history of China affected each of them. Flora had to undertake many arduous journeys to finally find a safe place to call home for herself and her family, she had to make some very difficult decisions.
I enjoyed reading the intricacies of how the Chinese family worked. The way Veronica's grandfather, Lo Bak, had married two sisters and at different times during the conflicts within China the two sisters and their families actually lived under the same roof! At certain times Veronica's mother even lived under the same roof too in the middle of all the inter family politics! Flora Li (Veronica's mother) had a hard life, her own mother was particularly hard on her and seemed to blame Flora Li for everything that went wrong in her own life. Flora did have help at certain times when she desperately needed it from her Brother Kin.
I loved reading of Flora Li's attempts to better herself with an education and that helped you understand why she was so determined that her children should all have an excellent education. Flora had to work extremely hard and endure many hardships to get her children into the "right" schools etc.
I also loved that her children had English and Chinese names. I enjoyed reading the meanings of the Chinese names. Flora's own full name was Li, Shing-Ying. Flora's father-in-law got the privilege of giving his Grandchildren their Chinese names, Flora gave them their English names. You will have to read the book for the meanings of the Chinese names, I do not want to give away such a lovely part of the book. I also love the Chines culture of looking after their elders/parents, it is a very respectful culture. The parts  of the culture I didn't like was the way Flora had to accept her husbands drinking and paying to dance with girls at night clubs.
Flora's eldest daughter was named Agnes and her Chinese name, Man-Kuk. the Eldest son was Patrick, Kin-Yip. Second Son was Joseph or Tai-Loi. Flora's second daughter was called Veronica or Tai-Ying and she is the person that has put together this beautiful book. Finally Flora's third daughter was Christina or Kum-Lun.
So did I enjoy the book?Yes, I loved reading of Flora's ups and downs along with the ups and downs of china too and how they affected Flora and her life and family. So would I recommend the book? Yes I would, especially to those who love memoirs and those interested in China and it's history too.