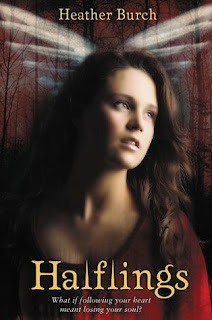 
BLURB from Goodreads
After being inexplicably targeted by an evil intent on harming her at any cost, seventeen-year-old Nikki finds herself under the watchful guardianship of three mysterious young men who call themselves Halflings. Sworn to defend her, misfits Mace, Raven, and Vine battle to keep Nikki safe while hiding their deepest secret—and the wings that come with. A growing attraction between Nikki and two of her protectors presents a whole other danger. While she risks a broken heart, Mace and Raven could lose everything, including their souls. As the mysteries behind the boys’ powers, as well as her role in a scientist’s dark plan, unfold, Nikki is faced with choices that will affect the future of an entire race of heavenly beings, as well as the precarious equilibrium of the earthly world.

MY REVIEW
Even after reading the novella of 11;15 the Making Of A Halfling. I was still unsure as to whether I would like this book or not. I was fairly slow at getting into this book, but once I did get into the story I enjoyed it. So what can I tell you without spoiling the book? Halflings are half human/half angel, they are caughter between two places between heaven and earth. The Halflings have "jobs" or "journeys" as they call them where they are sent to protect certain designated people. A lot of what they have to do on their journeys they have to learn along the way.
Nikki is a normal human girl......or is she? Why are the Halflings there to protect her? What does she know?
There's also a large scientific company thrown into the mix who are suspected of some sort of shady genetic testing. But how does Omega - The Scientific Company become connected to Nikki? And how does it fit into the Halflings Journey?
Then just to make things even more complicated these Halflings, Raven, Mace and Vine, have looks that have all the girls literally swooning over them! So now you're asking which one does Nikki "fall for"? Well that's kind of complicated too, as she has feelings for both Mace and for Raven. But it is forbidden for Halflings to fall in love with humans. To fall in love with a human means no redemption ever....
I felt a little let down at the end of book one that we hadn't found out as much as I thought we would. I suppose it's left the way it is as a cliff hanger, it definitely makes you want to read the next book to find out some answers to all the questions that book one raises.
The book did remind me a little of  Mary Ting's Crossroads series where Michael is given the job of protecting Claudia. to compare the two books, this book, Halflings, felt like a much more complicated version of a similar concept covered in the Crossroads Series. Perhaps at times made a little overly complicated. I did wish a few of the questions had been answered in book 1.....such as exactly what is Nikki? ...A Seer? An Angel? what? I got a little fed up of wondering what/who she was.
So did I like this? Yes Would I recommend? Yes Would I read a bk2/more by the same Author ? Yes, I need those answers to the all the unanswered questions!

Available from Amazon.co.uk
Posted by Jeanz xx at 06:00