BORN AT MIDNIGHT BY C.C. HUNTER 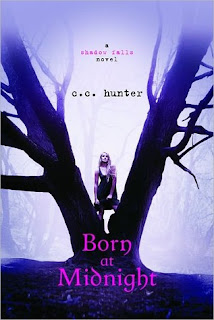 
BLURB from Goodreads
One night Kylie Galen finds herself at the wrong party, with the wrong people, and it changes her life forever. Her mother ships her off to Shadow Falls—a camp for troubled teens, and within hours of arriving, it becomes painfully clear that her fellow campers aren’t just “troubled.” Here at Shadow Falls, vampires, werewolves, shapshifters, witches and fairies train side by side—learning to harness their powers, control their magic and live in the normal world.Kylie’s never felt normal, but surely she doesn’t belong here with a bunch of paranormal freaks either. Or does she? They insist Kylie is one of them, and that she was brought here for a reason. As if life wasn’t complicated enough, enter Derek and Lucas. Derek’s a half-fae who’s determined to be her boyfriend, and Lucas is a smokin’ hot werewolf with whom Kylie shares a secret past. Both Derek and Lucas couldn’t be more different, but they both have a powerful hold on her heart. Even though Kylie feels deeply uncertain about everything, one thing is becoming painfully clear—Shadow Falls is exactly where she belongs…


MY REVIEW
My daughter received this book direct from the author C.C. Hunter (and its signed) so definitely one we won't be parting with! I have being going to read it for a while but then continued to commit to dated reviews so couldn't manage to read it. Then my daughter kept saying I would really enjoy it etc Rachel recommended it etc (here's her review) So I decided I could manage to fit this one in before my next time dated review.
Well Rachel was right I really did enjoy it. Born at Midnight is the first in the Shadow Falls Series. You will learn the relevance of the title within the book. The main character in the book initially thinks that shadow Falls is a camp for misbehaving children, somewhere their parents pack them off to when they can't be bothered with their children. Kylie learns the real purpose of the camp as you get into the book.It was a little slower starting than I normally enjoy but I felt the slower start to the book helped me get to know the characters a little better instead of being bombarded with things I would need to remember. The descriptions of both the surroundings and the characters are so detailed that you have no problem of visually imagining the people and places.
I love the character of Kylie, the way she can have lots of her own problems, such as her parents impending divorce, and the fact her boyfriend just dumped her because she refused to go "all the way" when he pushed the issue with her, yet she always manages to help those around her with their problems. I know we don't officially know what Kylie's supernatural talent/gift is yet but I definitely believe that  empathy skills are part of her gift.
I thought the way C.C. Hunter has the Supernatural's reading each other by wiggling their eyebrows whilst concentrating on the Supernatural they wish to read is comedy gold. Its really funny by the end of this first book when a character wiggles their eyebrows you start doing it with them. so if you read in public places get ready for the funny looks lol!
The book is quite light, in that it has humour within it, but it does deal with some very serious subjects, divorce, parents new partners, dyslexia and racism against the supernaturals as a whole and within their individual races. The book also covers different friendships and the difficult subject of teenage sex. The book is very cleverly written and does not come across preachy about any of the subjects it covers or touches on.
This book has plenty mystery, suspense, danger and still has room for joy, happiness, humour,understanding and love too.
Kylie finds herself attracted to two guys. One who is initially thought a very bad guy, but she later learns he is not guilty of the terrible crime she thinks he committed. The other guy is a good guy...or is he ? One of his talents is being able to control peoples emotions and Kylie can't help but wonder if he is manipulating hers into falling for him. I purposely have tried not to mention characters names or too much of the plot as I think you should discover it in the same way I did through reading the book for yourself. As though my daughter recommended the book she would not tell me anything about it, other than the details in the synopsis. I could go on and on about this book but then I feel I would give too much of it away so I will stop now! I will move on to the book cover, I really like the different purple shades of the cover it suggest mystery, possibly danger.  Then there's the image of Kylie standing in the middle of a tree that has been split down the middle, which to me represents how she feels at certain points within the book herself as though she is split in two or is in two minds about what to do/say. You will read more about the tree and its significance within the book.

So did I enjoy the book?Yes, Would I read more of the series/ more by C.C. Hunter? Yes am already reading Bk 2 Awake At Dawn. Would I recommend? Yes even though it is aimed at the YA market I still enjoyed reading this book.