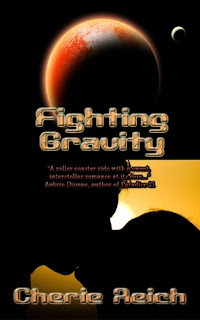 
A Futuristic Space Fantasy NoveletteForced into executing Aresia's people, Phoebus escapes the Aresian Guard by flying his spaceship through a wormhole.The only single woman of marrying age, Marissa flees town instead of becoming a third wife.When Phoebus's spacecraft crashes upon an asteroid-ravaged Earth, he is captured by a rogue Earthling youth and thrown into a cellar. Marissa stumbles upon the spacecraft, but it explodes before she can find any sign of the alien. When she awakens, she discovers the alien's whereabouts and vows to help him. But Phoebus's Aresians have landed and are searching for him. Phoebus and Marissa must battle against their despair and their peoples in a quest for their freedom. And through it all, an Earthling and an Aresian will find it easier to fight gravity than their love for each other.


This is the second novelette in Cherie Reich's Sci-Fi Gravity Series. I did enjoy this short story, you get attached to the characters quickly.  In this story two totally different people from different races are running away from their own people, when they become captured. Once again these people end up joining forces to escape their captors. They quickly come to care and rely on each other.
there is danger, aliens, suspense, mystery, and friendship in this short tale.
These short novelettes are ideal to sit and read when you don't have a great deal of time or to squeeze in between other books as a breather perhaps. I could see these short tales within magazines as your "read with a cuppa" type of tale. I also think it would be great if Cherie Reich put all her novelettes together in an anthology of her works.

Did I enjoy the novelette? Yes, just wish it had been longer , I felt I wanted to know even more about the characters and wanted to find out what happened to them next. Would you read more of this Series? YES Please! would you recommend this novelette? Yes, its a good short read.

***WARNING* A novelette is longer than a short story but not as long as a novella **
Posted by Jeanz xx at 01:30