THE P.U.R.E. by CLAIRE GILLIAN 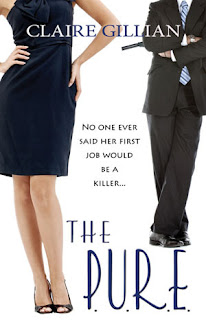 
BLURB from Goodreads
No one ever said Gayle Lindley’s first job would be a killer.Fresh out of college, Gayle’s career path should follow the yellow brick road straight to the top. Thanks to a menial errand gone wrong, a wayward tongue, and a randy supervisor who won’t take ‘no’ for an answer, Gayle’s stuck in corporate hell.Discovering a company secret only turns up the heat.The one part of her life not going down in flames is her friendship with the gorgeous but intensely private, Jon Cripps. Jon would make the perfect consolation prize for Gayle’s pity party if dating a co-worker wasn’t career suicide. Then again, with all Gayle has been through, maybe falling in love is the lucky break she needs.Hitting the cool sheets with Jon soothes her mind and body, but it also enrages whoever’s behind the smokescreen she’s uncovered at work. Someone is willing to kill to protect their secrets, and Gayle and Jon are the targets.With both her heart and livelihood at stake, Gayle’s early career-limiting moves could turn into life-terminating ones.

MY REVIEW
I really enjoyed this book, I had been reading a lot of fantasy/paranormal so this was a nice change. It has mystery, suspense, danger and of course some romance! i actually couldn't bear to put this book down I started reading it around tea time and ended up taking my kindle up to bed and continued reading until I finished the book.
Gayle's relationship with Jon at the beginning of the book is mere work colleagues, but it grows into a true friendship when Gayle is being harassed by her supervisor. Then eventually it turns to love.....but can Gayle truly trust Jon? Is he what he seems merely a very private quiet man or is Jon hiding a secret?
Gayle has plenty of problems at work with the continuing and escalating sexual harassment, then she uncover a fraud at a company where she is auditing. the more she uncovers the more dangerous her life becomes. There's a murder, but even that doesn't even stop Gayle from digging further to find out who is responsible for the fraud. This book has you thinking and "playing detective" along with Gayle. It is so well written it has you guessing as to who the bad guys are right to the very ending of the book! I hope we get to read more escapades with Gayle and Jon.
I also like the cover. The colours of the business attire, promote the seriousness of the book and the world that the characters work in.
Did I enjoy the book? Yes Would I read more by Claire Gillian? Definitely would I recommend this book? I already have to my mum!
*WARNING* this book does contain some sexual references, innuendo and scenes, so is aimed at adults.


Available from Amazon.co.uk
Posted by Jeanz xx at 03:00