READ ME DEAD BY EMERALD BARNES 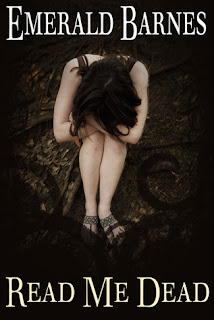 
BLURB from Goodreads
Alexia Wheaton’s problems go beyond picking a dress and a date for homecoming. For seven years, Alex has lived with a painful memory - her parents' horrific murder. As the sole witness, she has kept quiet to protect herself, but when the local newspaper reveals her secret, Alex is plagued with fear that her parents' murderer will soon find her - and silence her forever. Alex is catapulted into a race against time to save her own life and bring her parents' murderer to justice.

What a brilliantly written book. I really hated to put it down. I loved the all characters. It is a complex tale, but things become much clearer as Alex opens up about her parent's murder to her brother Matty,  ex boyfriend Christian and Landon. To say Alex has complicated relationships with Christian and Landon is an understatement. Alex believes anyone she becomes attached to will be killed, so she ends her relationship with Christian even though she is still deeply attached to him. Then Alex finds herself slipping into a relationship of more than just friendship with Landon, even though she knows it will put him in danger too. The man that killed Alex's parents is still out there somewhere and alex keeps getting the feeling she is being watched.Alex also has awful nightmares too. After opening up to Matty, Christian and Landon, Alex has mixed feelings about their pledge to always protect her.
Its really hard to tell you much more about the book without giving away any spoilers however tiny they may be I do not wish to spoil other enjoyment of this brilliant book.
I really felt drawn in and hooked on the story. Trying to guess the identity of the murderer. I did kind of guess but then there was yet another twist and turn, so was also surprised too.
I loved the close friendship of Alex with her twin brother Matty, even though it had its up and downs he is there when she needs him eventually. I also thought the characters of Christian and Landon were great, two great good looking guys who both love Alex, how will she choose?
I really liked how Emerald Barnes gave us the "two years later" section, of Alex married and about to have her first child.... You still find yourself asking the question is Alex safe? Then right at the very end there's a final little twist that leaves the way open for a book 2. Put it this way I hope there's a book 2, as it's on my wishlist now!
I think even though Emerald describes this as a YA novel I think it would appeal to adults, I am suggesting my mum (Ena who guest reviews for me)read it for an older persons point of view on the book too, and of  course I am recommending it to my daughter (Rachel of Rai29BookReadNReview) as I feel she too would enjoy this story that has, suspense, tragedy, heartbreak, tears ,mixed with plenty of love too.
I also need to say that I think the cover really fits the book. I think the girl on the front of the book cover represents how dark, scared and alone Alex feels even when surrounded by people you can feel alone.
As for the title, I can't explain it now as it would give away a spoiler or two, but the title really fits the book. So please go buy the book! If I used a rating system this book would get top maximum marks. I really can't rave about this book enough. This book is well worth the money!
So did I like the book? Like! I Loved it  Would I recommend this book?YES Would I read more of this series? Yes Please as soon as its ready! Would I read more by Emerald Barnes? Yes I Love her writing.