THE WITCHING PEN BY DIANNA HARDY 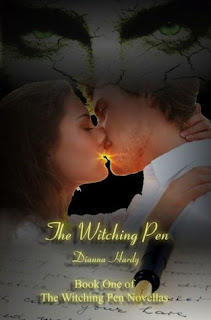 BLURB from Goodreads
(Book One of The Witching Pen Novellas) It's hard being the most powerful witch on the planet. It's even harder when you're a twenty-five year old virgin who'll lose all of that power the moment you sleep with someone ... that's why Elena's never slept with her best friend and flatmate, Karl, despite the true feelings they harbour for each other. Elena's about to discover that there are even more difficult things in life to deal with. One of them comes in the form of a pen she discovers one day, a pen that allows anything she writes to come to pass... Suddenly, it's not just her powers or her heart that's at stake, but her very soul, as a dream demon with a seductive pull uses the pen to try and turn her away from her reality, and from Karl. But the pen is just the beginning. Everything Elena has believed in is a lie, and her world is about to fall apart... Includes the bonus short story, Wilted (A Witching Pen Novellas Prequel)

I received this book direct from the author Dianna Hardy, for me to read and review and it has the newest cover design which is pictured about. Apologies for it taking me such a long while to read and review this book, I just ended up much busier reading and reviewing than I thought possible. Not that I am complaing!
I really do like this cover as it depicts Elena and Karl and their love and the golden light that emanates from them when they kiss which Gwain calls "love" in the book.
I also really like the original cover which I have picture below that depicts Elena and her powerful bright green eyes.
This is a novella and has a taster of the second novella at the end of it, just to tease us whilst we wait for it to become available! This novella also has a bonus short story called Wilted which is actually set ten year prior to The Witching Pen. we see the early rumblings and stirrings of adolescent feelings between Karl and Elena. We also learn that Elena's mother has a dislike for Karl, though when you learn the secret she tells Elena about her future you wonder if its Karl she dislikes or just his relationship and its future possibilities with Elena that she finds irritating. Elena is devastated, mortified, and embarrassed all rolled into one when her mother reveals the secret. Part of the secret being she would lose something precious that she holds dear should she ever have sex with a man. This bonus story could be read before to "set the scene" as a prequel or as I read it after The Witching Pen.
The Witching Pen is set ten years later than Wilted and Elena's relationship with her mother has deteriorated even more in the last ten years, so much so they hardly speak. Elena's mother still has a dislike for Karl which she openly displays to him. Elena and karl are now housemates and everything is platonic....or is it? ....or will it stay that way? Elena has found a "magic pen" which when it writes something it comes true. Which wow! sounds like a dream come true right? Well,turns out its more like a nightmare. then Elena begins to have serious trouble when she falls asleep and of course Karl wakes her from her nightmare and old perhaps forgotten, maybe suppressed feeling are brought to the surface again. Just as Elena thinks her life is going to be perfect, she decides to sacrifice the thing her mother told her she would lose if she ever had sex to be with Karl (I know it sounds long-winded but I am trying not to give out spoilers here folks!) Elena has decided she has always loved Karl.......and then bang! do they don't they? If they do what happens? You need to buy the book to find out!
This book has Witches, Witches Council, Pagan Rituals, Portals, Different types of Demons, Half Demons, Succubi, Angels, Half Angels and of course an occasional human or three thrown in!
This book is a quick fairly fast paced read, there is plenty of action and suspense, and what? why? how? Oh No! moments too you will not want to put it down.
So did I enjoy this this book? Definitely YES  Would I read more in the series? YES please! Would I read more by Dianna Hardy? Oh YES Would I recommend this book? YES 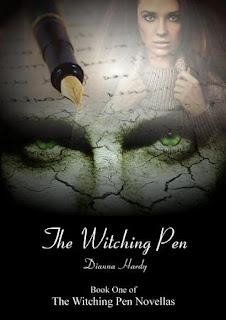