TWIN-BRED BY KAREN A WYLE 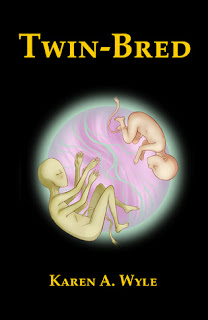 (Blurb taken from Goodreads)
Can interspecies diplomacy begin in the womb?
In Twin-Bred, the human colony on Tofarn and the indigenous Tofa have great difficulty communicating with and basically comprehending each other. Scientist Mara Cadell, who lost a fraternal twin in utero, proposes that host mothers of either or both species carry twins, one human and one Tofa, in the hope that the bond between twins can bridge the gap between species. Mara has secretly kept her own twin, Levi, alive in her mind as a companion and collaborator.
Mara succeeds in obtaining governmental backing for her project – but both the human and Tofa establishments have their own agendas. Mara must shepherd the Twin-Bred through dangers she anticipated and others that even the canny Levi could not foresee. Will the Twin-Bred bring peace, war, or something else entirely?...

Initially I found the book a bit hard going as the concept is quite complicated, but as you get further into the book and more is explained about "The Project"  things become much clearer and you soon become attached to the main character Mara and of course the twin-bred themselves. Mara is a complicated character and at times you wonder if she has made up an imaginary friend whom she talks to and then you learn her true tragic story. You learn about the Tofa, the race that the planet really belongs there, then you learn about the humans who landed on the planet and are trying to take over. The story is of "The Project" and how both Tofa and Humans have their own agendas for this project. There are brilliant and poignant life stories within the actual main story. There are tragic deaths in the book too both Human and Tofa and how those affect the Twin-Breds who seem to belong no where. They are literally treat as out casts as they are neither Human nor Tofa in the eyes of those races. The story shows the issues of trust and different races learning to live together in peace. I could go on more and more about this book but do not wish to include spoilers, but I would compare this book to Across the Universe by Beth Revis. I hope that ther is a book two as I know i would read it and want to know what happens to the Twin-Bred and Mara and the other Humans. It is definitely worth reading!