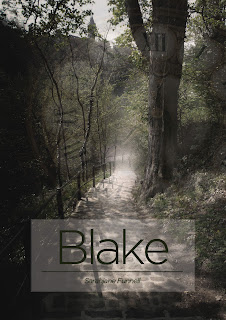 New YA ebook by Sarahjane Funnell
Children’s Author Sarahjane Funnell has published her first YA fantasy story entitled Blake, launching as an
ebook with Amazon and myebook.com on Monday 10th October 2011, published by Gibson Publishing.
Blake, downloadable for £2.99, is the latest literary addition to her published repertoire, which includes the short story Princess Rose and the Royal Tea Castle published within the middle grade Children’s Anthology A Pocketful of Moondust. Blake is an aloof and mysterious guy. He possesses a sharp glint in his eye and
harbours a hidden secret. Ebony, a schoolgirl, becomes completely mesmerised by him and his strange character. Longing to unveil just what it is that makesBlake so different, Ebony desperately searches for him to find the answer. When Ebony finally has an opportune moment to discover the secret that surrounds
Blake, she learns that it is not only he who hides an unknown identity but that she too has an inner secret that stretches far beyond her own existence. An unknown secret that changes not only her thoughts and the ways of the world but also her physical human form.
Blake is a captivating short story that will spark the imagination of Young Adult readers, taking them on an emotive journey of self-discovery within two contrasting worlds. Featuring rich language and powerful emotion, Blake is perfect for readers looking for an introduction to fantasy fiction or shorter reading.
For further press information and images please contact Sarahjane Funnell on 07816 075726 or email sarahjanefunnell@hotmail.co.uk.To find out more about Sarahjane Funnell please see extra notes below or visit www.theenchantedpages.blogspot.com or follow her on Twitter @sarahjanestyle.

Extra Notes
* Sarahjane Funnell a newly published children’s fiction author and is also the Regional PR Officer for LUSH Cosmetics. She studied at UCA Epsom and graduated in June 2010 with a BA (Hons) in Fashion Journalism. Predominantly Sarahjane writes young children’s picture books and a middle grade stories but is
now launching her first short story written for YA readers. Sarahjane Funnell quotes:
“I can remember as a young girl being at home writing little stories and drawing pictures then putting little books together. I remember reading adventure books such as Enid Blyton classics and Alice in Wonderland as well as watching fantasy films including Charlie and the Chocolate Factory, Disney’s Beauty and
the Beast and Sleeping Beauty. These stories and have inspired my love for castles, magical lands and imaginative creatures. As a teenager I loved watching Buffy the Vampire Slayer. It was my favourite teen series and I always wanted to be just like Buffy and became fascinated by Angel and the mystery that
surrounded him. I have also been inspired by the likes of other current fantasy films such as Twilight and Avatar. I also have a fondness for nature, beautiful gardens and historical houses which comes from growing up in Plymouth, Devon and being surrounded by the likes of Dartmoor, many National Trust houses and
of course the sea.”

* A Pocketful of Moondust is a magical children’s anthology that was launched in January 2011 by independent publishers Rebel Books LLP and is available to purchase online from various online bookstores including tesco.com, amazon.co.uk and waterstones.com.
*Blake by Sarahjane Funnell will be available to download as an ebook from Amazon and myebook.com on Monday 10th October 2011
*Cover Illustration by Graphic Designer and Illustrator Dimitra Mathioudakis www.dimitramat.com
Posted by Jeanz xx at 01:00