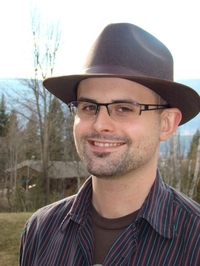 What is your name, where were you born and where do you live now?
My name is Ben Dobson, I was born in British Columbia, Canada, and live there to this day.

What is the name of your latest book, and if you had to summarise it in less than 20 words what would you say?
My latest (and first) novel is called Scriber.  It’s the story of a misanthropic historian forced to save the kingdom with the help of the King’s warrior niece.

How long does it usually take you to write a book, from the original idea to finishing writing it?
Hard to say what’s usual, since I’ve only finished one novel worth reading, but Scriber took me six months from start to finish.  Although actually, much longer than that—I batted the original idea around for several years in a vague way while doing other stuff.  I tend to do that with a lot of my ideas.  I don’t really count that time though--I only really sat down and really came up with a plot and such six months ago.

Do you have plans for a new book? Is this book part of a series?
I am starting on a new fantasy trilogy.  Scriber was a stand-alone, so it’s a new experience plotting something out over three books.  I don’t want to give too many details yet, though, since everything tends to change once I get into the plotting stage anyway.

What genre would you place your books into?
I write Fantasy pretty exclusively.  Not much room for debate there.

Do you have a favourite character from your books? and why are they your favourite?
Dennon Lark from Scriber.  He’s a bit of a jerk, which was fun to write.  I don’t have a big stable of characters to pick from, so that’s just for now, but I enjoyed writing him.

Where do you get your book plot ideas from?
My brain?  Really though, I played a lot of tabletop games like Dungeons and Dragons growing up, so a lot of my inspiration comes from characters and ideas through up for those.

Do you gift books to readers to do reviews?
I did a giveaway on Librarything for Scriber, and will continue to do so with my later books.

How do you come up with the Title and Cover Designs for your book/books? Who designed the Cover of your books?
Ronnell D. Porter did the cover of Scriber.  The Quill and Inkwell is the symbol of the Scribers—the group of historians my main character belongs to—so I always wanted that on the cover.  The handwritten looking text in the background was all Ronnell, taken from actual excerpts of things the main character in the book writes.  I love the way he placed it so only the most ominous bits are visible.

How do you market/promote your books?
Poorly!  I don’t know, I’m pretty bad at social networking and the like.  I’ve got a website, and done the Librarything giveaway.  I have a short story called The Last Hero that I offer for free on a number of sites for anyone who wants a sample of my work.  Beyond that, I’m just making it up as I go along. 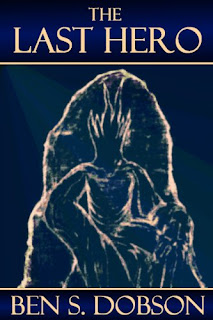 What do you think makes a book a really good/bestseller ?
That’s hard to answer.  I think trying to create a bestseller rarely works.  It helps to be writing in a genre that’s currently popular, but you can’t just manufacture a story in that genre purely to make money—it’s got to have some soul or whatever you want to call it.  I think luck is a big factor too.

Have you ever suffered from a "writer's block"? What did you do to get past the "block"?
Sure. Sometimes I’ll just take a bit of time away from thinking about it, and the solution will come when I least expect it.  If that doesn’t work in a day or two, though, I just have to sit down and hammer out a chapter or whatever just to see how it goes.  It lets me see what works and what doesn’t.  If I just never go back until an answer hits me, it’s a lot of wasted time.

Is there a certain Author that influenced you in writing?
George RR Martin, definitely.  The Song of Ice and Fire books really showed that you can write a fantasy that is less about magic and more about characters and plot, which appeals to me.  Also Guy Gavriel Kay, because he just writes beautifully, and has a knack for creating extremely powerful moments.

Which format of book do you prefer, ebook,hardback, or paperback?
I’m all about eBooks.  The future is now!  Really though, I love my Kindle, it’s easy to get all the books I want.  I live in a small town, so it’s a real pain to get new books when they come out—our bookstore has a pretty limited selection.  The Kindle makes things much easier.

What is your favourite book and Why?  Have you read it more than once?
I don’t know that I have a single favourite book.  I love the Song of Ice and Fire series and I’ve read them all more than once.  The Lions of Al-Rassan by Guy Gavriel Kay is one that I go back to a lot.  Also, a bit outside my usual genre, but I really like Swan Song by Robert McCammon.

Do you think books transfer to movies well? Which is you favourite/worst  book to movie transfer?
I think it depends.  Being too faithful and trying to keep things that don’t work on screen can ruin an adaptation, and completely ignoring the source material is just as bad, and you tend to either get one or the other.  Sometimes though, you get a Lord of the Rings trilogy, which for my money might be better than the books, as sacrilegious as that might be.  So that’s probably my best.  Worst—the Golden Compass.  That whole series could have been amazing in theatres, but they just botched it so bad, took all the soul right out of it.

What are you currently reading? Are you enjoying it? What format is it?(ebook, hardback or paperback)
I’m currently reading the entire Discworld series by Terry Pratchett on my Kindle.  I stayed away from them for a long time because I was being pretentious, all “I want my stories serious, this jokey business is for lesser humans”.  But I tried them recently, and they were a wonderful surprise.  The thing I love about them is that the characters are never sacrificed for the humor.  As amusing as the books are, I keep going with them because I love Rincewind and Granny Weatherwax, among others.

Do you think ebooks will ever totally replace printed books?
Probably not totally, but I do think they’ll eventually become the predominant form.  They’re simply too much more convenient.  I know a lot of people like the physical paper books for various reasons, and I enjoy a printed book myself from time to time, but you can’t carry more than a few with you at once, and they take up so much space.  I don’t have the shelf space for the books I have now.  I think issues like that will end up making the difference—eBooks are just generally more practical, and as much as some people like to be romantic about the old ways (myself included), practicality tends to win out, historically.

Are there any New Authors you are interested in for us to watch out for? and Why should we watch out for them?
Myself!  Honestly, I think I’m too new to be an authority on this, but there are dozens of great new authors self-publishing these days.  I just read Moses Siregar’s The Black God’s War, which was incredible and a fairly recent release, so I’ll go with him I guess. Thank you for doing the interview Ben. Am looking forward to reading and reviewing my copy of Scriber as soon as I have time.
Posted by Jeanz xx at 14:02