1. What is your name, where were you born and where do you live now?
My name is Felix Timothy Alusa and I was born in which is 's coastal and second largest city and as at this moment I'm a resident.

2. Did you always want to be a writer? If not what did you want to be?
Well, from a very young age I knew I was a good story teller because of how I could hold my friends attention when relating to them a story, then as I grew older I had an easy time with school essays and slowly I figured writing was a part of me and eventually when I joined high school, I attempted to write my first fiction novel. So in a way yes. But I also had an interest in planes and so after giving into riddicule from classmates regarding my writing, I decided to study Aeronautical Engineering. I thought, "If my classmates don't appreciate my writing, I can't make a good writer." But the yearning to write kept burning inside me.

3. When did you first first consider yourself as a writer?
2009, when I completed my first manuscript, and my college buddies loved it. Actually it was the manuscript for Ionshaker but at that it had a different name.

4. Did it take a long to get your first book to be published?
Yes, it took forever. I queried dozens of agents and book publishers and got turned down which took like a year, then finally I thought of self publishing and submitted my manuscript to a publisher who took another year to make my book, and even after the book came out, it was a mess with punctuation and many other glitches. Can you believe they never edited it even though they promised to? And since I couldn't give it to reviewers I had to cancel my contract with them and start afresh, all over again looking for another publisher. It was so so frustrating Sandra.

5. What is the name of your book , and if you had to surmarise it in less than 20 words what would you say?
My book is called Ionshaker and its 20-word summary is: The president asks two wanted men to repossess a new, top-secret, sophisticated nuclear software called Ionshaker stolen by terrorists.

6.Do you have plans for a new book? Is this part of a series?
Yes. I  am currently working my second high concept novel. Is Ionshaker a series? It could be. What I mean is, I ended the story with a twist where after recovering the software, the president realizes that China has already re-created a superior Ionshaker replica and the  president asks one of the characters -Trey to go to China. So if  I decide to do the sequel it will about Trey on an undercover mission in China trying to steal the replica. But that will depend on Ionshaker's reception.

7.What genre would you place your books into?
Thrillers, suspense-thrillers.

8. Where do you get your book plot ideas from?
Anywhere, imagination, friends, current events, general concerns, experiences  - mine or those of people I've interacted with and movies.

9.Will you gift books to readers to do reviews?
Absolutely. In fact during this moth of October in an attempt to create an awareness about my new book I'll be giving away free ebook copies of Ionshaker to interested readers so they can post independent reviews on Amazon, their blogs, Goodreads, facebook, twitter etcetera about Ionshaker. All that anyone interested needs to do is to follow me on twitter, like my facebook fan page and send me a request on my email. That simple.

10. How do you come up with the title?
Titles are not easy to come up with for most writers including myself. I remember reading John Grisham's letter to his readers in his first book "A Time To Kill" and he admits he isn't good with picking titles and that he had to change his tittle from "Deathknell to "A time to Kill." But I try to come up with several titles during the course of my writing and proofreading as I also check online to see if someone has already used them. I also ask friends. For example, its my buddy who suggested Ionshaker, I had wanted to call it Ironshaker instead, see what I mean?

11. What do you think of trailers?
Just like movie trailers, book trailers give an insight of the story in the book and are a great marketing tool. I totally believe in trailers, check out mine at http://www.youtube.com/watch?v=3H97gVeoZPc


I have posted the first chapter of Ionshaker on my blog http://feltim.blogspot.com 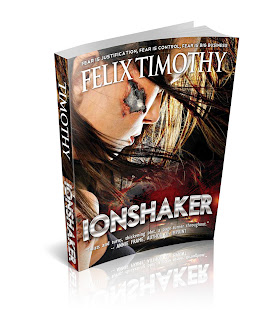 Thank you so much for doing this interview Felix! If you wish to win a copy of Ionshaker enter the October Giveaway here