DECEIVING THE PROTECTOR BY DEE TENORIO 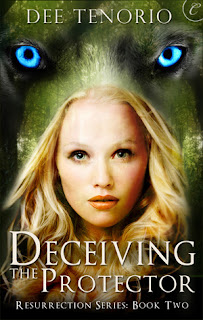 Book 2 in the Resurrection Series
After a series of murders is discovered along the trail of the Shifter Underground, wolf soldier Jensen Tate is the one assigned to find and protect a missing stray. But Lia Crawford, the missing stray, doesn't seem to want his protection. When she eludes his watch and then returns with mysterious injuries, Tate knows she's hiding something from him. To discover Lia's secrets, Jensen will have to win her trust....and get closer to the woman he thinks may well be his mate.
Lia has reasons to keep her distance. The killer is haunting her steps, and seems determined to claim her. He will come after them both if he sees how drawn she is to Tate, though it becomes increasingly difficult to deny her attraction to him. Protecting Tate is vital - but will her deception cost her his love?

Oh Wow I loved this book.....I really did, it is up there with The Shifter Series by Rachel Vincent and the Kelley Armstrong Women Of The Otherworld Series! and to be totally honest I never thought I would find a shifter series as great! I just want to read more...... Dee please tell us there's going to be lots
more? The possibilities seem endless, I mean we haven't actually been in Ressurection yet, well, only briefly so there are many more shifters to meet and their stories to tell.
I find the cover so strong and powerful, the eyes are just the colour you imagine for Tate's. Tate is such a brilliant character, and then so is Lia! I didn't think this second book would be as good as the first but...I have to say it was even better. Its so well written, the relationships and dialogues between the characters so "real". The relationship between Tate and Lia make you laugh, make you smile, and it also breaks your heart at point and gives you tears in your eyes, but it also gives you a warm n fuzzy feeling.
The ending was not exactly as I expected it was better, I have to say it was perfect! Lia is a strong female character and Tate is a strong character, so strong he even dares to kind of argue with his Alpha and his mate. both characters have their own difficult pasts that they have to put to rest as well as dealing with the phsycopath Asher who has bonded to Lia and thinks of her as his mate. The bond is complicated and this book goes into more detail to explain it, which ties in with the story and journey of Tate and Lia. I love that Lia is as tough a character as Tate. you wouldn't know which one to bet on in a fight lol.
The only thing I think I should point out is that due to some sexual content this book is for adults or older teen readers.