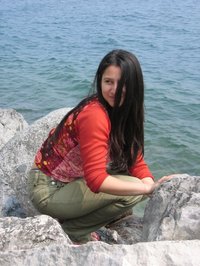 My name is Dianna Hardy, I was born in Brazil, but I've lived in the UK for the last 25 years.
Looking back, I think I did, but like most kids, I went through phases. I also wanted to be an actress, a singer, a lawyer, a criminologist, a pathologist, a private investigator and one of the Charlie's Angels.
I'm a full time mum. My daughter's now two and a half -- after she turned one, I decided not to go back to work, but to devote the time I would have spent at work to writing instead, as it's always been a passion of mine.
It's called The Witching Pen. It's a quirky, fast-paced, adult paranormal romance, with a "Buffy-esque", urban fantasy undertone.
I've had poetry and short stories published by small presses since I was seventeen, but now I self-publish. I'm happy to continue sending a few things off to small presses occasionally, but I actually enjoy self-publishing and feel the act of doing so adds to my writing rather than takes away. There are as many good self-published authors out there, as there are bad ones. I publish under the imprints Bitten Fruit Books and Satin Smoke Press.
It really depends ... for a 30,000 word story, anything from one month to three months depending on what else is going on in my personal life at the time. I always aim to write about 1000 words a day. It doesn't sound like a lot, but I edit profusely as I go.
I write under three names -- many genres, but they're all quite specific: In fiction, I write paranormal romances, erotic romances and erotic horror, sometimes non-erotic fantasy / horror; I also write poetry (nowadays, gothic poetry, inspired by dark fantasy); and I write Mind-Body-Spirit chapbooks. To add fat to the fire, I'll be starting on a YA paranormal book next year. All info can be found at DiannaHardy.com
There'll be at least three books in The Witching Pen Novellas, and then a spin-off series called The Last Angel (which will be more urban fantasy than romance), and I'm creating a whole new paranormal erotic romance series called Eye Of The Storm, all about werewolves, thunderstorms and bounty hunters.
Across all the genres I write, I would say "paranormal" is the keyword, followed by fantasy, then romance.
It's quite hard for me to choose between my characters; I feel like I'm doing them a disservice by picking one over the other. Hmmm ... I like Amy and Karl in The Witching Pen, Amy because she's a lady with complicated issues, who's very sassy, and Karl because he's just such a refreshing change from the Alpha male (not that I don't like my Alphas -- I do! But I also like a guy to be real, funny and witty, and Karl is those things).
I've always written. It's always been the most natural form of communication for me; even now I favour it to talking. Recently, it was reading Heather Killough-Walden's Big Bad Wolf series that inspired me to write my paranormal stories and get them published.
The sky.
I design my own covers -- I LOVE designing covers, and actually, creating the covers helps me solidify a story in my head. If a cover sticks, I know a story will too. I come up with the titles as well.
Twitter, Facebook and of course, wonderful book bloggers -- we would be nowhere without book bloggers! My Facebook fan page is very active.
If I ever get to that stage, I'll let you know!
I tend to procrastinate, rather than get writer's block. When I do get it, I get over it by just writing -- writing anything -- even if it's gibberish. By continuing to write in spite of your block, you are telling your brain that you won't stand for that kind of tantrum, that it won't win by creating a block ... eventually it learns its lesson!
I'm extremely bad at unwinding. To be honest, I find writing relaxing, and if something gets in the way of my writing, that's when I tend to freak out.
Only loosely -- not really.
I've already mentioned Heather Killough-Walden, and I love J R Ward's Black Dagger Brotherhood series -- reading their work motivates me to write, but I would not say that my writing is like theirs -- I have my own style (I'm not sure what it is though, lol!).
I love eBooks and paperbacks equally -- have never really been a fan of hardcovers.
They can transfer well, but you need a talented screenwriter and a director that really gets what the screenwriter is doing. The best example I've seen is Peter Jackson's Lord Of The Rings Trilogy. It's AWESOME.
Only when trees become endangered.
Penelope Fletcher -- penelopefletcher.co.uk -- (a UK indie author) is very good -- she's got a great imagination, and her writing is beautifully descriptive as well as unusual.
I try not to go there. Once I write a book and consider it finished, it's finished.
Just do it. If you want to self-publish, get yourself at least two good proofreaders; if you're going to send off to publishers and you feel your work is as good as it's going to get, flood the system -- send it everywhere. But ultimately, just do it.
I do have two other pen names for my "heavy duty" erotic fiction -- they're not secret, they just help to keep the sub-genres separate. I write so many different genres I could do with two more names, but we'll leave it at three -- I don't think I could cope with more!

Book Two of The Witching Pen Novellas -- The Sands Of Time -- is out at the end of November.

Thankyou for taking the time from your writing schedule to do this interview for my blog!
Posted by Jeanz xx at 19:00