DEATH IS A RELATIVE THING BY HOLLY PATRONE 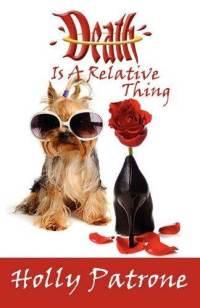 
April Serao's love life is much like a desert, dry, dusty and a little cracked. Six years ago, her husband Sal died while having sex.
That was bad, but he was with her, so it could have been worse,however he hadn't finished renovating the kitchen, so it really could have been better. Now April's raising their three sons alone.Word got around about how Sal met his unfortunate demise which has earned April a "killer good" reputation. Because of it, most men put a considerable amount of distance between her and them.Her mother Marie takes April to see a local celebrity psychic,convinced Sal will talk to them. April knows Sal hasn't held up his end of a conversation in a long time but goes anyway because her mother is wiry tough, sports Cherry Cola #17 red hair and is a force to be reckoned with. She's also a "Sicilian Guilt Trip" ninja, and April knows she won't win the battle.April works as a Technical Support Engineer at a company called Tin Cup Software. Her co workers and occasional partners in crime are Rob and Marley. Rob has a hologram perfect family and Marley passes the time by tweezing chin hairs while talking to customers.She lives with a large multicolored parrot named Rodney that she believes is going through teenage angst.An out of state business associate asks April on her first date since Sal's death and she soon finds herself struggling to balance her past, her children and friends and the possibility of new love. Her life, further complicated by a dead musician, a little latex and a few bad guys becomes a rollicking laugh out loud read that you won't want to miss.


Well I have to say I was only a little way through this book and it already had me laughing out loud! It is full of quips and wit that make it all the more enjoyable. Poor April is treat like the plague by the male population just because her husband died whilst they were ...er ...shall we say doing the dirty deed! lol The male population seem to think she can kill them with a look or a touch of the hand, its so funny. April also has her Italian mum to contend with who can guilt trip her down a telephone line and does so every night at 7pm sharp. It's one of these phone calls that ends up changing April's life. You see April's mum is chatterring on (as only mum's do) and April is only half listening 9as only us daughter's do) and april ends up volunteering to accompany her mum to a physic show, which April thinks is all a load of rubbish! But seeing she was only half listening and had agreed to go without realising she can't back out now. April prepares to be sat bored by other peoples messages when she ends up the centre of attention, even though she at first denies a message would be for her. Something changes after that evening's show. I am not saying what but please buy this hilarious in places book! Anyway back to April's life, so then along comes Jack from out of state who doesn't initially know about these "touch of death" rumours and even when he finds out he laughs it off and wants a relationship with April. Which should be pretty straightforward .... but and I think I can say a little without spoiling the book for you....April has a certain voice speaking to her, who isn't quite ready to let her go on to another relationship. This voice also lands her right in the middle of a gang battle too. So how does April cope? Read the book and find out it's brilliant!
I must add due to some of the jokes and innuendo this book is meant for adults and not the teenage market. For all lovers of chick-lit this book is a must read hilarious book!!