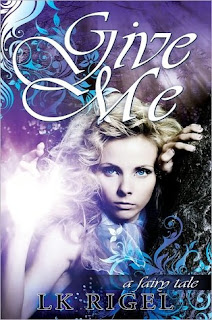 When my seventh grade teacher read a story I wrote to the whole class. It was super melodramatic, about going blind. At the end of it, she announced with enough melodrama to match my purple prose, “That is a writer!” It was wonderful.

Yes. In my day job, I’m a court reporter. It’s wonderful, like being a paid eavesdropper, and gives me contact with all kinds of people.

Give Me: A young witch with a good heart. Two lovers in mortal danger. A spell that ends in disaster.

I knew the entire story of Give Me almost immediately after I started on it, but it was pretty tricky weaving the back-and-forth of the time periods and figuring out how to reveal information in a nonlinear way so that it still made sense. I’d say that it was my both easiest and hardest book to write so far.

There will be two more books in the world of Give Me, a short story about how Cade’s mother came to marry Lord Dumnos, and a full-length novel about Lilith and Cade’s link to the fairies and Idris’s attempts to get satisfaction from them for insults real and imagined. I also have three more books planned in the Apocalypto series, a murder mystery, and a vampire book screaming to get out of my head. Other projects wanting their turn are a door-stopper of a historical family saga and a retelling of one of the stories in the bible. I wonder if I’ll live long enough to get to them all!

I love Durga from the Apocalypto books. She’s so fierce and sure of herself in a way that’s foreign to me. Once, she fought off a giant raptor with her bare hands! Or so they say.

A reader at Amazon UK said that Space Junque was so lacking in atmosphere they should use it to put out forest fires. I thought that was pretty funny! But it was a useful comment. I do tend to write rather sparsely. I think it comes from being a songwriter for so many years and making each word count. What I’ve learned from reviews like that is people don’t want to just visit the world of a novel; they want to live in it for a while. 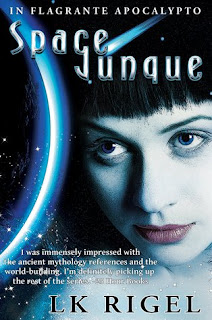 Space Junque (Apocalypto 1), a novella.
The DOGs want to destroy the world. The gods want to make a new one. The trick is to survive both.
The world is on the brink of ecological cataclysm set off by the Oil Spill of 2010 and the Great Sea Level Rise of 2070. Hydroponics agronomist Char Meadowlark has become a recluse since her fiance was killed by a terrorist bomb and her twin sister Sky went underground to protect a top secret alternative energy project. Warned about an impending eco-terrorist attack, Char tries to get off planet, but the Defenders of Gaia strike while she's at the airport. Shuttle pilot Jake Ardri might offer her only hope.
When the DOGs' onslaught goes global and the material world threatens to implode, the ancient gods reemerge to take control over humanity. Through the ensuing chaos, Char must juggle two men, a world on fire, and a goddess with an agenda for a new world order.
Will there be any room for love in flagrante apocalypto?
Posted by Jeanz xx at 14:07