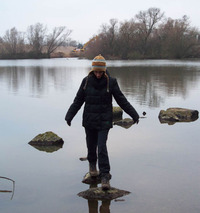 What is the name of your latest book, and if you had to summarise it in less than 20 words what would you say?
Darklands: Geeky girl abducted into parallel world finds alarming differences and uncomfortable similarities as she tries to find her way home.

How long does it usually take you to write a book, from the original idea to finishing writing it?
I started my first novel (a vampire romance) when I was 13. I finished it twenty years later, failed to interest *one* agent and – devastated - immediately gave up on it. I continue to tinker with it every couple of years, cuz I think it really captures the raw, selfish, visceral emotions of adolescence. But I can't seem to get it quite right. I am aware that by the time it's finished I will almost certainly have missed the boat for that genre! In any case, I'm pretty sick of vampires at the moment.
Darklands took about three years while working part time. It would have been quicker, but a mild bout of cancer got in the way :-/

Do you have plans for a new book? Is this book part of a series?
My books are all stand alone so far. I can't think far enough ahead to plan a series! I have almost finished the first draft of Kikimora, though a lot of editing will follow. Very loosely based on Russian folklore, it is the story of a reluctant monster, a heart-broken magician, a frustrated musician - and the magician's cat, who just might have the solution to all their problems. It's quite different to anything I've written before. I think because the vogue now is for really dark teen angst - ever the rebel - I've chosen to go lighter. The closest thing I can think of to compare it to is the Studio Ghibli film, Spirited Away. I love that mixture of magic, wonder, charm and other-world oddness.

Do you have anybody read your books and give you reviews before you officially release them?
As an author working on the same piece for three years or more you can get kind of snow-blind. I think it's vital to get feedback before offering your books up for sale. I'm fortunate in having two very supportive sisters who are both voracious readers and stern critics. Their comments on the first (okay, the fourth or fifth!) draft of Darklands helped me to shape and hone it, and make it the best it could be. But I also do a huge amount of proof-reading myself, continually paring down my prose to lose superfluous bumph (multiple adjectives – I'm looking at you!), hunting down clunky phrases, seeking and destroying the random punctuation that always manages to creep in from somewhere...

What is your favourite book and Why? Have you read it more than once?
Howl's Moving Castle by Diana Wynne Jones is my favourite book. I must have read it at least ten times. It's funny, magical, romantic, clever and mind-bending. The plot is sufficiently twisty-turny that up til about the fifth re-read I still always forgot exactly how it all worked out. At her best, Diana Wynne Jones wrote the most perfect prose: deceptively simple, no difficult words, no flowery waffle – but such a charming and individual voice, and a mischievous sense of humour showing through in her descriptions of people.

Do you or would you ever use a pen name?
When I was 13, and writing that first, failed vampire novel, I planned elaborate, elegant pen names. I hated my own. Twenty five years later I'm proud of what I've achieved and want to see my own name on the book cover.

So after the great interview, by the way Thank You Emma! You will all want a few more details about the book. I will of course be reading and reviewing this book some time soon. 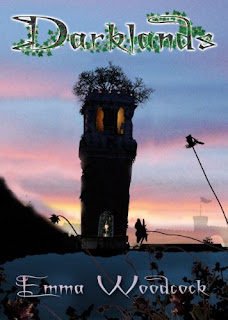 Sophie is not the most popular fifteen year old girl at school. You see Sophie's not thin enough, she's not pretty enough, and she's way too interested in maths and physics to be even remotely cool. So when Sophie finds herself mysteriously transported into another world where it never rains, the sun always shines, the people all think she's fantastic and their impossibly handsome king dotes on her, she can barely believe her luck.
However Sophie gradually begins to realise that all is not as well as it seems in the mysterious placxe called Darklands. Firstly why are all the visiting delegations so angry with the King? And what is the mysterious millenniversary everyone keeps talking about? Also exactly what is Sophie's role in it all?
Drawing on fairy tale folklore as well as ideas of parallel universes, Darklands imagines a world similar to our own, but in which technology is viewed as outlandish and miraculous, while people routinely use magic to do everyday things. Sophie finds both alarming differences and uncomfortable similarities between the two worlds as she struggles to find her way back home - preferably without turning the universe inside out..