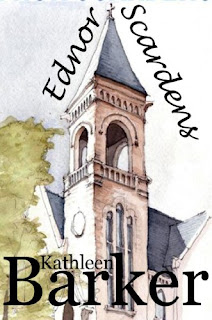 Kathleen Barker was born in Baltimore, Maryland and currently lives in Timonium, Maryland

It was never my goal to have a career as a writer, but there were hints of it. I wrote for my high school newspaper and then for a company-sponsored magazine when I lived and worked in New Orleans, Louisiana. I wanted to be an English teacher, but the frequent moving involved in my former husband's military career short-circuited that.

Not until I actually sat down and wrote "Ednor Scardens". It started out oddly. It struck me that I didn't know much about my mother's younger years and I was concerned that if anything happened to me, and my children had to give my eulogy, that they wouldn't know much about my youth. So, I sat down one night to put a few things down on paper and it just blew out of control as I added incidents and characters. I wrote nearly non-stop and in three weeks, I'd produced nearly 400 pages! I entered the story into Amazon's Breakthrough Novel Award contest and made it through a few rounds before one of the last cuts. Then it was picked up by FIBP and offered as an ebook in the Spring of 2011. The print version is set for release in November 2011.
Do you work another job as well as your writing work? What is the name of your latest book, and if you had to summarise it in less than 20 words what would you say?
No, I'd taken an early retirement offer sever years earlier. "Ednor Scardens" is a coming-of-age story of a young girl set in Baltimore in the 1960's. Two brothers vie for her affections as a predatory priest stalks her.

I finished the initial draft in three weeks, but spent months and months editing and test-reading it. I think that was an anomaly to finish a book that quickly.

:"Ednor Scardens was easiest to write because it is filled with personal knowledge and incidents. I didn't have to create many fictitious characters or story lines.

"Ednor Scardens" is the first book in a series called "The Charm City Chronicles." There are four books in the series that follow the original characters as they grow into adulthood, facing different trials and dilemnas.

Each book in the series will have a staggered release. I'm currently working on a book involving a group of college students involved in a scandal while playing for their university's lacrosse team.

I hate classifying books, but I'd place them in Literary Fiction and the sub-categories of coming of age, romance, women's and young adult.

The first and third volumes of the Charm City series are my favorites because of the sub-plots they contain.

I'd have to say Anita Collins is my favorite. She's the best friend of the main character, Kate Fitzgerald. Anita knows more than she should about boys for a girl her age, and she always looks out for Kate, who is rather naïve.

I began in 2009 for the reasons stated in question #3 above.

The book is basically what I call bio-fiction, so the plot evolved my my own real-life experiences.

Yes, I have a few friends who know me well enough to be frank and honest.

I haven't done that yet, but may in the future.

Absolutely. It's important for me to know what readers think.
What was the toughest/best review you have ever had?
That would have to be the one from a girlhood friend who was expecting a much more adult handling. I think she felt badly when I pointed out to her that it was never described as such.

I grew up in a neighborhood called "Ednor Gardens", and the story concerns the things that left scars. Hence, the title, "Ednor Scardens". I worked with a very talented woman named Ceri Clark.

Right now, pre-print release, I utilize social media such as facebook, twitter, Book review clubs and site, my blog and word-of-mouth. That will intensify as Fantasy Island Book Publishing grows as a company and we set up in-store signings at bookstores among other things.

First, I think it has to have a good story that people want to read. After that it's all marketing and promotion to get the word out.

I have brief bouts of block, but I find that the best way to get around it is to have a regular time to put thoughts down on paper....if I prime the pump, the water usually flows.

I spend time with family and hit the gym.

Definitely. That is the case with all four of my novels.

I can't say there are hidden messages, but there are passages where I hope young readers will take something from the difficulties my characters experience. The importance of protected sex is the one that jumps to mind mainly.
Is there a certain Author that influenced you in writing?
Believe it or not, Stephanie Meyer was a big influence,

I can't say that I prefer one over another.

The "Twilight" series is one of my favorites. I couldn't guess how many times I read all four of them!

Some books translate well, but it all depends on the director's and producer's vision. It's a real art to know what to include and what may not be essential to a movie version. Again, I loved how the original "Twilight" transferred to the big screen. The casting was dead-on.

I think that ebooks will continue to eat away at the print market, but there's room for both. It's such an individual choice.

Even with the distractions of school and the lure of the internet and video games, I think the wild popularity of books like the Harry Potter series has shown that kids want to read. Imaginative writing is something that needs a much greater emphasis.

I'm horrible at trying to read any in-depth analysis type books, like things that examine the economy. I'll fall asleep every time.

I have a growing stack of books by new authors. Alison DeLuca's "The Night Watchman's Express" was just impossible for me to put down. Danielle Raver's "Brother Betrayed", Dean Lappi's "Black Numbers" and Gary Hoover's "The Land of Nod" are all clamoring for my attention. These are immensely creative writers whose work I find truly thrilling.

No, I can't say there is anything I'd change at this time. Maybe when my grandchildren can read, I might not want them to know some of the things I did!

I think they have a place in marketing and promotion as long as they are true to the story and don't over-hype a book for the sake of promotion.

Write about what excites you....what you love.

I don't know if I might in the future, depending on the subject matter of the book, but I don't use one now.

Thank you for taking the time from your busy schedule to take part in this interview!
Posted by Jeanz xx at 05:00