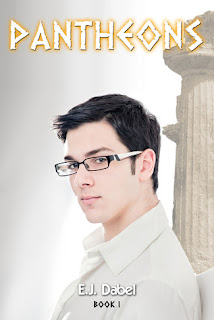 BLURB from Goodreads
On the streets, they call fifteen year old orphan Isaiah Marshall the “Indestructible Diamond”. Isaiah is the leader of the “Redrovers”, a group of teenage misfits consisting of his friends Jeremy, Monty, and Pipsqueak, but when they trespass into “Kaliber Academy” to get even with the arrogant Jason Ollopa, they are in way over their heads. Principal Webb enrolls them into the High School and Isaiah soon learns about the existence of the gods of the Ancient World. Because the gods have refused to fight the last War for fear of the Mysterious Dark, the Powers-that-Be have stripped them of their spiritual bodies and given them mortal, teenage forms. Isaiah discovers he's not only a god, but that he's the child of the Greek goddess Metis, the son destined to overthrow his cruel and sadistic father Zeus, the Darkener of the Sky, and become the greatest god in all the Pantheons. Isaiah is thrown into a world where the democratic Olympians, war-mongering Norse, Gothic Celts, firstborn Egyptians, the enlightened Hindu, the animal-like Aztecs, the martial artist Asians, the intelligent Babylonians, the great spirits of the Native American Indians, and the fierce Finnish will war against one another for the greatest of all prizes: the Dominion.
I always say I am totally honest in my reviews, so, I have to begin my saying that initially I didn't think that this was "my type" of book. Then I began reading it and thought "oh no its going to be all complicated about gods, and who is on whose side etc etc" but it was not overly complicated and as you came across each God you didn't really need prior knowledge as it was explained and put across which Gods and ~goddesses had which strengths and weaknesses.
The book is well written and once it hooks you, you are there with it to the end! The end has a twist I certainly didn't see coming and things are left well open with plenty of unanswered questions for a BK 2. and yes Bk 2will be on my wishlist to read!!
I loved the characters of Isaiah and his gang, the fact his was not some perfect guy. Isaiah has a speech impediment throughout the book, though at times he does overcome it, so his character is really believable. separately the members of Isaiah's gang would seem like a rag-taggle bunch of misfits who are weak and would be easily crushed by enemies too. However when Jeremy, Monty - the one always eyeing up the ladies and Pipsqueak - the walking dictionary  are together with Isaiah, they are a strong formidable group. Isaiah begins the book just thinking himself an oddball really and not even speaking to his friends, who think he is a mute! He develops and finds out he is the son of Zeus, he finds out who killed his mother and immediately swear vengeance. Isaiah begins to have confidence and speaks. he has always fought for survival living on the streets, but when he starts attending the Kaliber Academy he has to fight for acceptance to the Godlings group and then fight for his life in a tournament organised on a magical island. I loved the character of Isaiah, he may live on the streets and have to regularly fight for survival but he has principles, he prides himself on fighting fairly....and one of his rules is he doesn't hit girls! Even when he is provoked he doesn't hit girls!
The book is quite thought provoking and you find yourself referring back to earlier instances and references in the book that suddenly make sense, and are relevant. You feel Isaiah's deep love and affection for his mother, and his hate and need for revenge against his father. Isaiah doesn't trust easily you have to earn his trust, just as he expects to earn yours. he doesn't take for granted or exploit his new status when it is revealed to him. he values each and every one of his friends, and when told they will be in danger goes as far as distancing himself from them even though it hurts him deeply to do so.
I finished this book in three sittings, and really enjoyed it and, yes, would recommend it too! Am putting Bk 2 on my wishlist now!!
I also love the simplicity of the cover, is the guy on it Zeus? Isaiah? or someone else? you need to read the book to decide for yourselves. As always I have tried to give no more "spoiler" or plot away than is already mentioned in the blurb, as I hate someone telling me all about the book, I like to find out about the majority of the book/plot myself when reading it. (Hope you agree).