THE WAY WE FALL BY MEGAN CREWE 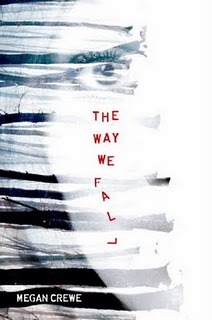 It starts with an itch you just can't shake. Then comes a fever and a tickle in your throat. A few days later, you'll be blabbing your secrets and chatting with strangers like they’re old friends. Three more, and the paranoid hallucinations kick in.
And then you're dead.
When a deadly virus begins to sweep through sixteen-year-old Kaelyn’s community, the government quarantines her island—no one can leave, and no one can come back.Those still healthy must fight for dwindling supplies, or lose all chance of survival. As everything familiar comes crashing down, Kaelyn joins forces with a former rival and discovers a new love in the midst of heartbreak. When the virus starts to rob her of friends and family, she clings to the belief that there must be a way to save the people she holds dearest.
Because how will she go on if there isn't?

My Review
So what did I think to the book, I really enjoyed it. I liked the format of it being Kaelyn's diary or her legacy if she died of the virus. The diary style makes you feel as though Kaelyn is talking directly to you.The diary is wrote to an old friend of Kaelyn's called Leo who left the island. Though Leo and Kaelyn had a fall out and had not spoken for a while she wishes to apologise to Leo and put thinks right just in case....Kaelyn has to grow up pretty quick when the virus hits. initially people think its fine to continue as normal. Kaelyn even thinks her father who works at the medical research centre is being paranoid when he wants her to stay indoors, but it soon becomes apparent that Kaelyn's father is right to be worried. this virus claims lots of people Kaelyn knows and loves, from neighbours to her own mum. Can Kaelyn's father find the cause of this virus and make a vaccine to prevent others catching it, and medication to help those who have already succumbed to the virus. Although there is death and sadness in this book there is also love, hope and friendship too. Kaelyn makes an unlikely friend who ends up being quite a big help in the fight against the virus as well as the looters too.
Meanwhile the town is going mad, its becoming dangerous to venture out, there's no firemen or police, so looting begins as well as a gang who are even more dangerous who have guns and don't seem to care who they shoot to get what they want. The mainland has in effectively quarantined the island no one goes in and no one can leave, though a few manage to escape which only increases the mainland’s excuse for totally quarantining the island when a few mainlanders also catch this horrible deadly virus. The book ends in such a way there must/should be a book 2 as their are plenty of unanswered questions left...... The book does end on a note of hope, which naturally encourages to want to read a bk2.
There  is more than one cover version for this book, the one I have printed is the one I like the most because the girl on the front is Kaelyn and I think represents the book better than a plain yellow cover which is the option.                                                                                                                                                          This book is a medium paced book, there's plenty of action, some adventure, plenty of heartbreak for those who loose loved ones to the virus and a little touch of teen romance too.

This book is Available 24th January in hardback!
Check out my earlier Interview with Megan Crewe Author of The Way We Fall here
Posted by Jeanz xx at 09:30