THE FLOWERS OF WAR BY GELING YAN Guest Review by Ena 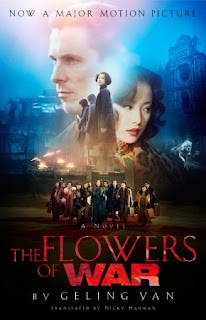 BLURB from Goodreads
It is December 1937 and the Japanese Imperial Army has just entered Nanking. Unable to reach the Safety Zone in Pokou, a group of schoolgirls are hiding out in the compound of the St. Mary Magdalene mission. They are looked after by Father Engelmann, an American priest who has made China his home for many years. The church is supposed to be neutral ground in the war between China and Japan, but eyewitness reports from the outside make it clear the Japanese are not obeying the international rules of engagement. As the soldiers pour through the streets of Nanking, committing unspeakable atrocities on civilians, thirteen Chinese courtesans from a nearby brothel climb over the church compound's walls seeking refuge. Their presence further jeopardizes the children's safety and what happens next will change all of their lives.  A haunting, passionate story inspired by true life events during the Nanking Massacre, this novel shows how war challenges our prejudices and that love can flourish amidst death and destruction. The Flowers of War is an unforgettable journey through the depths of the human heart.

The cover of this book really drew me to it, and I thought I would love it, that it would be similar to the famous film the Inn Of Sixth Happiness type of thing with Ingrid Bergman, but unfortunately I have to admit I was sadly disappointed.  For my taste there was far too much emphasis on the war itself rather than the people and the lives it was affecting.
I liked the characters of the two priest, the way they took in everyone without prejudice. They took in young schoolgirls and also local prostitutes to try to protect them from the Japanese. Naturally the Japanese find out about women /females being with the  Priests and some have to make a sacrifice to save others. I wanted even more about the humanity and the characters lives instead of grisly realities of war and fighting.
I would recommend this as a more male orientated book with the amount of fighting and bayonet use involved in the book. Was definitely not one to curl up cosy with!