BETWEEN BY MARY TING 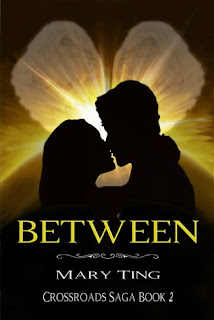 BLURB from Goodreads
As the alkins head back to Crossroads, Claudia leads her normal life; but not for long. Having a special soul, Claudia attracts danger, and she soon finds out who Gamma asked to watch over her. The Twelve, known as Divine Elders on Earth, are very much involved when they find out that Aliah, one of the God’s first angels, escaped from the Abyss when the gates were opened by Aden. Needing Claudia’s soul to escape the only place Aliah can reside–a place between Heaven and Earth–he sends his demons in search of all Claudia Emersons on Earth. Taking her soul will enable him to be released from Between and cross over to Crossroads, which would give him immense power. As more secrets are revealed Claudia learns about the venators—nephilim, demon hunters. Now two opposing forces must work together in order to save Claudia and humanity from the most dangerous angel ever created. But along the way, trust becomes a big issue. Will love be enough to keep Claudia and Michael together? Who will make the ultimate sacrifice? Who will betray them all?
MY REVIEW
WOW I did not expect to say this but this second book of the series is even better than the first!
It is so well written! The relationships with Claudia and the Alkins are becoming even closer, the love between her and Michael is plain to see and beautifully depicted throughout the novel. Claudia is also feeling a strange confused sort of attraction to Austin. I love the Alkins trying to learn the "human" speech and dress sense etc. Davin is as humorous as ever and Caleb is coming to the fore and speaking more within this book than he did in bk1.
This book has humour, suspense, fights,death, joy, sadness, sacrifice and heartbreak
In this book Claudia has to learn to let go of her grief over the death of Gamma and learn to use her "secret" power. Claudia hates the way that other Claudia Emerson's are being killed as they are being mistaken for her. Claudia also realises she will probably end up facing this demon called Aliah before the fight is over. Though as ever she feels safe that she has the Alkins to protect her.
Davin and Michael try do "normal-human" things in this second book more too, like the Valentines School Dance with Claudia and her friend.
Michael also faces a heartbreakingly no win situation, an extremely difficult thing he is ordered to do as part of his duty concerning Claudia. We find out there is a spy within the angels.......not necessarily  the one you will immediately jump to the conclusion of it being either.....
I didn't want this book to end... I loved it and was reading it through blurred vision at the part when Michael has to make his heartbreaking choice, that really he doesn't have an actual choice as he is ordered to do it.  The book ended by setting the scene, for the next book. Michael has a new mission, as does Davin, and Claudia is also on the brink of starting a new different sector of her life too.
I love all the characters in this series of books, how they interact with each other and all love Claudia in their own ways. All the characters have their own little quirks and personalities and of course their own destinies too.

I have to add that I think the cover goes brilliantly with the book, depicting Claudia and Michael and their deepening relationship on it.
So did I enjoy it?  Loved It! Would I recommend it? YES!
Can't wait for Book three in this series!


Also see my review of Bk 1 Crossroads by Mary Ting  and my previous Interview with Mary too.