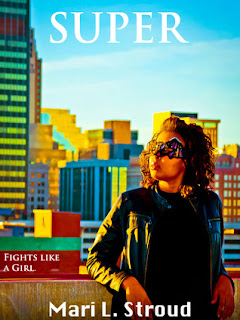 1. What is your name, where were you born and where do you live now?


Mari Stroud.  I was born in Dallas, Texas, and I currently live in the US Midwest.

2.  Did you always want to be a writer? If not what did you want to be?
Actually, when I was a wee bairn what I wanted most to be was an illustrator of children's books.  Many sad tears were shed when I realized that I have no talent for drawing whatsoever.  (Except for eyeballs.  For some reason, I can draw a fantastic eyeball.)

3.  What is the name of your latest book, and if you had to summarise it in less than 20 words what would you say?
Super, and it's about a female superhero balancing her girlfriend, her ex, her family, and the odd dash of saving the world every now and again.

4.  How long does it usually take you to write a book, from the original idea to finishing writing it?
I start out by outlining off and on as I'm working on other things, letting the story come to me at its own pace.  This usually takes a few weeks.  After putting the outline away for a month or so, I take it out again and start drafting.  Seventy-five thousand words or so is my happy place, and I write at a pace of about 3000-4000 words a day, so first drafts go by quickly.  Then it's back in the drawer to think about what it's done, out again for a second draft (that takes about as long as the first draft), the critique group's draft, and finally the copy editor's draft.  I'm a Type A personality who gets all twitchy if she doesn't have something to work on. :)

5.  What can we expect from you in the future?  ie More books of the same genre? Books of a different genre?
I love horror and urban fantasy, so that's my happy place when I'm writing; Super is really only sci-fi on a technicality.  After this series is finished, I'd like to give the vampire sub-genre a whirl, plus I have an urban fantasy series revolving around the Lilith myth that I've been kicking around for the better part of a decade.  I'm nowhere near done yet.

6.  What genre would you place your books into?
The Super series is science fiction, but, as I said, it's strictly on a technicality based on the fact that there's no magic.  I don't actually get into the how of the ladies' powers all that deeply--I'm much more interested in what they do with that kind of power, for good or for evil.  I love genre fiction because you get to chew on all kinds of knotty problems through metaphor.

7.  Do you have a favourite character from your books? and why are they your favorite?
That's a tough question, because I tend to at least like all of my characters, be they hero or villain.  If pushed to choose, I love Ophelia, the POV character of Super, because she carries such a tremendous load of power and responsibility without letting it harden or isolate her.  She can kick your ass if it needs it, but by and large she's not a brooder.  As close seconds are J, because writing her dialogue is so much fun, and Bonnie, because she never gives up in spite of everything that's happened to her.  And then Catherine's just a psychopath, and that's fun.

8.  How long have you been writing?, and who or what inspired you to write?
When I was in third grade, I was forced at pencil-point to write a short story.  The teacher had to teach me to put in paragraph breaks every time I switched speakers, because I honestly didn't even know that much.  I owe Mrs. Flem big.

9.  Do you have anybody read your books and give you reviews before you officially release them?ie. Your partner, children, friends, reviewers you know?
I do the second draft on my own, then turn the book over to a very patient and gifted critique group for the third draft, and then over to the copy editor for a final polish.  Since Super is my first book and I was nervous about the formatting, I didn't do ARCs, but I plan to on the second, Fire with Fire.

10.  Do you gift books to readers to do reviews?
Yes.  The reviewer is doing me a favor by reading my work in the first place, it would be fairly arrogant and impolite to ask them to pay for it, too.

11.  Would you ever ask a reviewer to change their review if it was not all positive about your book/books?
Oh, my God, no, not unless the issue was a black and white factual detail.  (And even then, I would have to think long and hard about what I would actually gain.)  In fact, I'm watching the Good Reads YA scandal unfold with an open mouth right now.  Once the book is out in the wild, every minute I spend online is done in a professional capacity, and bad behavior on the internet lives forever.

12.  Do you choose a title first, or write the book then choose the title?
Super lived under a different working title until three days before it went live, and I wrote it almost two years ago.  I'm not kidding.

13.  Are there any hidden messages or morals contained in your books? (Morals as in like Aesops Fables type of "The moral of this story is..")
No one since Aesop actually pulled off the Aesop without dragging the story to a screeching halt.  That being said, it's also pretty dang difficult to keep one's own values and sense of right and wrong from leaking through into the work.  I love reading about strong, complicated women, so I write them.  I try to be a feminist in my own life, and I hope that others enjoy that aspect of the books, especially young women who are still figuring out who they are and who they want to be.
Posted by Jeanz xx at 13:00