EXCERPT - ALWAYS BEEN MINE BY ELIZABETH REYES 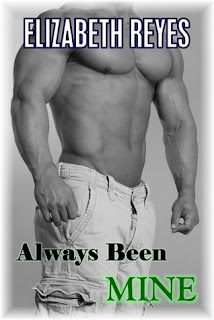 Alex thought he was over his ex Valerie until they were reunited briefly at a wedding shower just weeks earlier. Ever since he hasn't been able to stop thinking about  her. Unfortunately she informed him she'd moved on and is seeing someone new. In this scene he decides to join a few friends at a bar. He's surprised to see Valerie's roommate Isabel is there with his friend Romero.


Romero ordered everyone a round then turned to Isabel. “You think Valerie’s ready for another one?”

Alex’s eyes were immediately on the two beer bottles in front of Isabel. Romero was holding his so the other was obviously Valerie’s.

“Just bring her another one,” Romero told the waitress.

Isabel glanced at Alex, and now he knew what she’d been troubled by. She turned away quickly to talk to Sofia who was getting comfortable in the seat next to her. The anxiety was already making its way to his stomach. He hated that damn feeling. He turned casually back to the rest of the restaurant hoping to get the first glimpse of her out of the way before she was too close.

“So how’d they get you out of your cave, big guy?”

Alex shrugged sitting on the edge of one of the bar stools around the pool table.

Romero leaned over the pool table and took a shot. “What’s wrong with you, man? When’s the last time you went out?”

Alex didn’t even remember. He’d been so caught up this past year he couldn’t even remember the last time he’s had sex. That fact alone spoke volumes about the meaningfulness of the experience.

The waitress walked in with their beers. She handed him a bottle with the kind of smile he was used to getting from women. He reciprocated out of habit, but went back to looking for Valerie. Romero got busy paying the waitress. Alex took advantage and continued to search for Valerie. His anxiety spiked when he spotted her near the entrance. Not just because she looked even more amazing than when he’d seen her at the shower but because she wasn’t alone.

The sight of her with a guy close enough to kiss her made him squeeze his beer bottle. Alex took a deep breath and a bitter swig of the beer. This was not his idea of taking a break. He felt more angst at that moment than he had in all the weeks since the shower.

No way he was he spending the evening around Valerie and her new man. He took a longer drink of his beer. He’d be out of here as soon as he was done. Still gripping the bottle tightly he had to concentrate on not breaking it. As much as he hated the sight he couldn’t move his eyes away from her and the guy.

The guy held her wrist but not in the way a boyfriend holds his girls hand. The moment he saw Valerie pull her hand away defiantly he was on his feet. He welcomed the new tension that seeped through him. Unlike the tension he felt from seeing her with another guy he knew exactly how to deal with this one.

They weren’t talking they were arguing and Alex should be happy. Instead he went on an instant state of alert. Her boyfriend’s aggressive expression and the fact that he tried to grab her hand again was all Alex needed. He put his beer down and started toward them.