CALL THE MIDWIFE BY JENNIFER WORTH 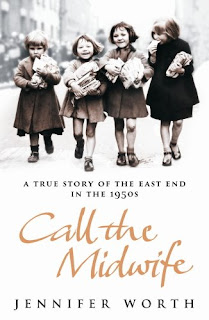 
Jennifer Worth came from a sheltered background when she became a midwife in the Docklands in the 1950s. The conditions in which many women gave birth just half a century ago were horrifying, not only because of their grimly impoverished surroundings, but also because of what they were expected to endure. But while Jennifer witnessed brutality and tragedy, she also met with amazing kindness and understanding, tempered by a great deal of Cockney humour. She also earned the confidences of some whose lives were truly stranger, more poignant and more terrifying than could ever be recounted in fiction. Attached to an order of nuns who had been working in the slums since the 1870s, Jennifer tells the story not only of the women she treated, but also of the community of nuns (including one who was accused of stealing jewels from Hatton Garden) and the camaraderie of the midwives with whom she trained. Funny, disturbing and incredibly moving, Jennifer's stories bring to life the colourful world of the East End in the 1950s.

Firstly I want to point out that I did read this book some time ago but after seeing it being made into a TV series, I felt I had to put a review on my blog to tell you all how fantastic the book is. Sure I agree that the TV sh0w is good, really good but please, please read the book too!
The book is based on what Jennifer Worth went through and encountered in her job as a midwife. I think TV has tamed it down slightly, the book describes things in a humorous, at times tongue in cheek way.
Sure as you read it you think Oh never! people never live like that etc but upon speaking to my mum after she read the book too she can remember families like those in the book from when she was a youngster!
So I would say watch the TV show the young lady who plays Jennifer has her down to the letter as she is described in the book. BUT I have to say there is nothing like reading the book yourself you will have tears of sorrow, tears of joy and tears of laughter when reading this book!
A MUST, MUST read! Also read the rest of the trilogy too, you won't regret it.