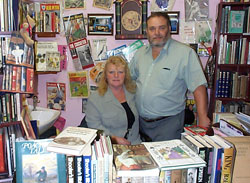 I’m Malcolm Noble; I was born in Nottingham (1951), but spent most of my youth in Hampshire. As a young man I served in the Portsmouth Police, which loosely provides a background for my crime fiction.  I now live in Market Harborough where I help in my wife’s second-hand bookshop.

Other information
My website www.bookcabin.co.uk contains details of my books and a blog.  My facebook page is Malcolm Noble’s TImberdick Mysteries.
Posted by Jeanz xx at 03:00