BOOK PROMOTION - TAKE BACK THE SKIES BY LUCY SAXON

WHAT THE PUBLISHER SAYS . . . .
This series is perfect for fans of fantasy adventure from Eragon to Mortal Instruments. Huge world-building, great characters and a page-turning plot! Each book in the series will be set in in a different land within the Tellus World Lucy has created. 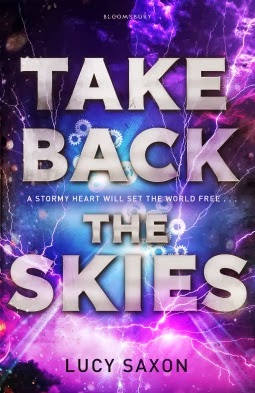 BLURB from Goodreads
Catherine Hunter is the daughter of a senior government official on the island of Anglya. She’s one of the privileged – she has luxurious clothes, plenty to eat, and is protected from the Collections which have ravaged families throughout the land. But Catherine longs to escape the confines of her life, before her dad can marry her off to a government brat and trap her forever.So Catherine becomes Cat, pretends to be a kid escaping the Collections, and stows away on the skyship Stormdancer. As they leave Anglya behind and brave the storms that fill the skies around the islands of Tellus, Cat’s world becomes more turbulent than she could ever have imagined, and dangerous secrets unravel her old life once and for all . . . 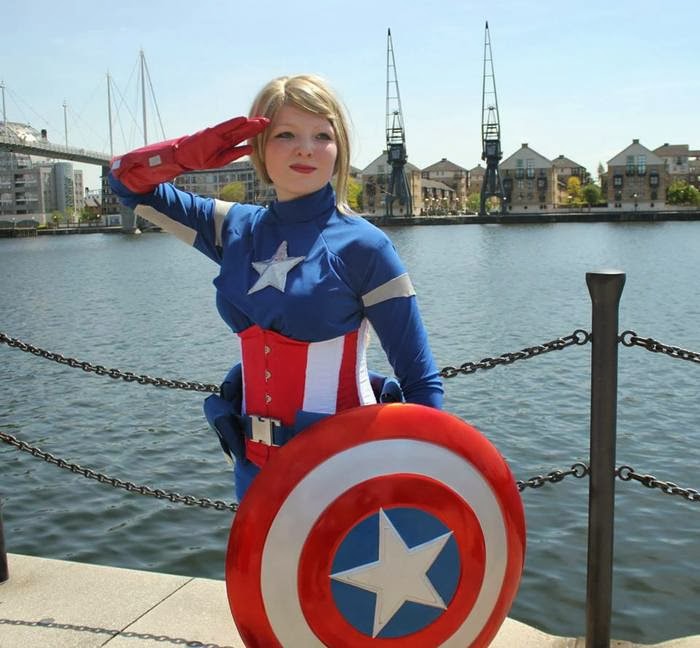 Debut author Lucy Saxon is 18 years old. Take Back the Skies is the first book in her young adult, epic adventure series. Lucy has always been a keen reader, but her love of writing began at the age of 12 when she first suffered from ME. She found herself missing lengthy periods of school, giving her the opportunity to indulge in creative writing. She wrote the first draft of Take Back the Skies when she was just 16 as part of National Novel Writing Month.

Lucy is a self-confessed all-round nerd and queen of CosPlay. She regularly attends fantasy conventions and makes all of her own costumes (see examples below). Lucy lives in Hertfordshire with her parents and brother.


Q & A with LUCY SAXON
(Q&A supplied by the Publisher)

What are your 5 favourite books, and why?
The Harry Potter series, because picking up Philosopher’s Stone at age 7 was what inspired me to start exploring the world of fantasy fiction.

The Mortal Instruments/Infernal Devices, because I find the whole concept very interesting and well-developed, and the Infernal Devices have a great steampunk twist to them.

Good Omens, because the level of wit and sarcasm cannot be beaten.

The Fault in Our Stars, because of the amount of time I spent crying in silence after reading it.

The Kingkiller Chronicle (Patrick Rothfuss), because the amount of worldbuilding in that series is immense, and his writing is incredible.

Who are your 5 favourite authors/illustrators, and why?
JK Rowling, both for reasons mentioned above, and the fact that without Harry Potter fanfiction I would not be the writer I am today!

John Green, both for his writing abilities and for creating such an amazing community as the Nerdfighters.

Rick Riordan, for writing middle-grade books that I still enjoy at the age of 18 more than most other books I’ve read.

Maria V Snyder, because everything she comes out with is gold.

George R R Martin, for being able to keep track of three hundred character storylines at once, and have them intertwine flawlessly.

Who is your favourite hero in a book?
Tyrion Lannister

Who is your favourite villain in a book?
Tyrion Lannister

If you could be a character from a book who would you be?
(You seriously expect me to be able to pick just one???) Luna Lovegood. Or Celaena Sardothien. Or Magnus Bane. The list goes on.

If you could recommend just one book for everyone to read what would it be?
(Again, just one??) Harry Potter and the Philosopher’s Stone

What book do you wish you had written?
Not including the Harry Potter series, Throne of Glass

Who or what was your biggest influence in deciding to become a writer?
JK Rowling and John Green

What inspired you to write your latest book?
The steampunk costuming and design I see at conventions

What's the best thing you've ever written?
Take Back the Skies, though I don’t have much else in the running for that title. I am pretty damn proud of some of my old fanfiction though.

When did you start writing?
At the age of 12

If someone wanted to be a writer what would be your number one tip for them?
Keep writing. Even if you think it’s terrible, keep writing; you will only get better with practice. And learn to finish the things you begin, because the ending is the hardest part.

Is there any particular routine involved in your writing process?
I don’t tend to sleep much, and I write the entire novel in a very short space of time, usually doing nothing but writing from the time I wake up to the time I sleep. Also I probably drink my own bodyweight in tea several times over.

Do you have any abandoned stories in you ‘bottom drawer’ that you would like to revisit?
Plenty! All of which I do actually plan to revisit at some point, when I have the time.

(The Information used in this post was sent to me via the publisher Bloomsbury or taken from Goodreads.)
Posted by Jeanz xx at 03:00