PROMOTIONAL SPOTLIGHT - CURSED BE THE WICKED BY J.R. RICHARDSON 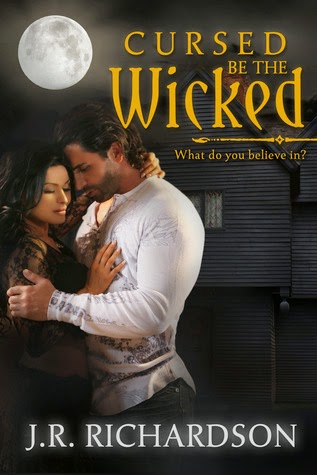 
BLURB supplied by Author
Cooper Shaw lives his life under a pen name and enjoys the anonymity it provides during his journeys across the globe as a seasoned writer for a travel magazine. When his job lands him in his hometown of Salem, Massachusetts to cover the famous Festival of the Dead, he soon realizes that he can’t stay invisible forever as he faces ghosts from a past he’s been trying to forget ever since he left.
The city holds nothing but bad memories for Coop until he meets a quirky young woman with an old soul and curious insights by the name of Finnley Pierce. While she acts as his tour guide through a town he thought he knew, Finn helps him unearth the truth of his childhood and might even begin to open up his heart.

By unraveling the mystery of his father’s murder, Coop may finally accept who he is, where he came from, and perhaps even realize what he wants for his future.

“I came by Geneva’s to see you this morning,” I tell her. She slides her hands inside my jacket, around my waist. She holds us together tighter.
“You did?” There’s a smile in her voice. I grin but she can’t see it.
“I’ve gotten used to starting my days out with you in them.”
“You have?” She leans back to look at me. She’s stunned although I have no idea why. I’ve been so transparent even a bat could see through me the past few days.
“Yeah,” I tell her, “I have.” I brush the hair out of her face. Even through the rainfall I can see the blush in her cheeks. This is the most vulnerable I’ve seen Finn since Geneva’s, when she thanked me for handling Dan.
“Most people don’t like the way I’m so pushy sometimes,” she says. “They find it offensive. Some might even say I’ve got a smart mouth. Too smart for my own good, blah blah blah.”
She trails off at the end there and I laugh at the way she thinks I’m buying that none of it bothers her.
“Come to think of it, you did say something I found offensive yesterday,” I tell her half serious. She looks hurt but I can’t stop the smirk from spreading across my face as I back her up against the nearest tree.
She’s caught off guard by the move, I can hear it in the way her breath hitches. “What was that?”
She tries to recover but she fails.
“I believe the term you used was friends,” I tell her, narrowing my eyes. Her lips part, just barely. She swallows something down then clears her throat.
“Isn’t that what we are?” 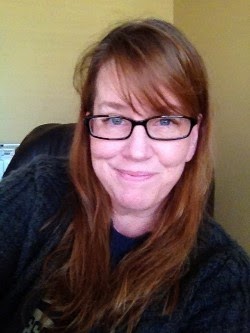 A writer of stories and lover of life.

Jo grew up in Maryland with four siblings, three parents and an endless number of cousins within the vicinity. Today she lives in Florida with her two girls and a husband that shares her same sense of humor and basic take on life as we know it.
Life is too short to put dreams on the back burner.


She’s always loved writing, and always enjoys a good mystery, so in 2012, Jo wrote a novel that was picked up by the good people at Soul Mate Publishing.

What is your name, where were you born and where do you live now?
I write as J.R.Richardson but my real name is Jo – I was born and raised in Maryland (Go Skins!) but moved to sunny Florida about 15 years ago with my now husband and we still live there with our 2 girls.

Did it take a long time to get your first book published?
Since finishing the story of Coop & Finn, it’s been about a year and a half of querying, signing, editing, marketing and finally, releasing.  It’s a lot of work but so much fun.

What is the name of your latest book, and if you had to summarise it in less than 20 words what would you say?
It’s titled Cursed be the Wicked and here’s the short of it:
He’s determined to forget the ghosts from his past.  She’s going to help him remember them, whether he likes it or not.
(sorry, that was 22)

Who is your publisher? or do you self publish?
I’m published through Soul Mate Publishing but I’m not opposed to self-publishing.  I think there are pros and cons to both.

How long does it usually take you to write a book, from the original idea to finishing writing it?
It took me about a year, give or take – I went through a lull where I was completely stuck, so I wrote a short story to get my mind off of it, which worked!  I came back to it and finished the last ½ of the book in about 2.5 months.

What can we expect from you in the future?  ie More books of the same genre? Books of a different genre?
I write a little bit of (almost) everything.  This one is a slightly paranormal, murder mystery with romantic elements and there is some definite humor embedded here and there.  The next one (of two that I’m working on) is more of a romantic comedy.  Nothing supernatural about it.

Do you have anybody read your books and give you reviews before you officially release them? ie. Your partner, children, friends, reviewers you know?
YES. I have a few people who read the story as I go to give me feedback and let me know if anything is not jiving with the story line – consistencies, etc.  And I have a very good friend who betas all my work as well before it goes out for any queries.  They all started as reviewers and have become very important people in my life.

Do you choose a title first, or write the book then choose the title?
Titles usually come later for me.  I know what I want to write about – so I start there, and typically, the title will show itself in the middle of a chapter or about ½ way through the story when I happen upon a specific moment between the characters.  There have been times though, when the title was evident pretty much immediately.

What do you think makes a book a really good/bestseller?
A story that won’t let me put the book down.

Which format of book do you prefer, ebook,hardback, or paperback?
Paperback if I’m being honest (even though I do a lot of reading on my eReader).  I like to abuse my books.

Do you think books transfer to movies well? Which is you favourite/worst  book to movie transfer?
Sometimes.   I really think it depends on the director and who wrote the movie script though.  My favorites have been The Lord of the Rings and The Hunger Games so far, and P.S. I Love You was really good as well.  Worst?  And this is very recent for me, but The Great Gatsby was written in such a way that it doesn’t really come across on the big screen very well I don’t think.  Maybe someone needs to try and modern day it up a bit.  It just didn’t work for me.

Do you think ebooks will ever totally replace printed books?
I hope not.  I read a lot on my eReader now but I still love holding a book in my hands too.  And I love having my favorites on my shelf so I can see them and touch them and hold them and love them.

Do you have a treasured book from your childhood? If yes, what is it?
Yes!  The Hobbit. *LOVE*

Do you have a favourite genre of book?
Usually Mysteries.  I also dig paranormals and comedies.  When they are all mixed up together, that’s even better.

What do you think about book trailers?
LOVE them!  I enjoy seeing stories like a movie so when someone can put a trailer together that brings it to life for me.

Do you or would you ever use a pen name?
I don’t, and I can’t think of any reason why I ever would, I have no plans to – but you never know.

If you could invite three favourite writers to dinner, who would you invite and enjoy chatting with?
Oh man.  One would be Jim Butcher.  I’d would just pick his brain to no end and talk about Harry Dresden theories until he booted me out of his personal space.  Another would be J.K. Rowling so I could listen to all her ideas for anything and everything she’s thinking about writing. I simply adore her mind and imagination.  The third might possibly be Veronica Roth so I could ask her – WHYYYYY???????

Amazon buy link for Cursed be the Wicked: http://www.amazon.com/dp/B00ISBVAJI/
Posted by Jeanz xx at 16:00