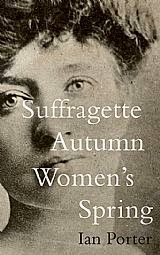 BLURB from Amazon.co.uk
The story begins in spectacular, if shocking fashion, aboard the Titanic as it's sinking. An important scene, which Ruby later realises was the genesis of her becoming a Suffragette, takes place in a lifeboat. Ruby and Nashey are left traumatised and horrified not just by the disaster itself, but by the failures of the ship's officers. Ruby is also profoundly affected by the misplaced trust in, and subservience to, these men. Readers are then taken to New York, and on to Halifax, Nova Scotia, before the novel unfolds in Suffragette London, 1912-1914. Much of the story takes place within the militant struggle for Votes for Women, into which both main characters become drawn through different avenues. Ruby gets involved in Mrs Pankhurst's WSPU, which sees her imprisoned, hunger-striking and being force-fed. Nashey is initially interested in social change rather than the vote but a different Pankhurst working down in the East End impresses upon him that the former will follow the latter. Through the five p's publicity stunts, protests, political speeches, prison torture and police tactics we see the lengths to which the women and government went to ensure they would prevail. A main character then questions the direction the movement is taking. But out of this apparent Suffragette autumn comes a women s spring... Suffragette Autumn Women's Spring is, predictably, a fast-paced page turner, but characterisation and interpersonal relationships are important themes, brought in through cracking dialogue. This gripping work of historical fiction will appeal primarily to women and has been inspired by a number of sources, including Sylvia Pankhurst and her books on the Suffragette movement, Hilary Mantel and Arthur Morrison.

INITIAL THOUGHTS
To be totally truthful I didn't read the whole description, I kind of got the gist the book was about suffragettes and saw the name Pankhurst and thought "wow I'd really like to read about them and what they got up to." Truthfully I couldn't have picked a better book for me to read! I did wonder if it was going to be list after list of protests etc or if the suffragette movement was going to be encapsulated within a believable story. I found out the more favourable choice of the latter was the case.

ENA'S REVIEW
ENA'S INITIAL THOUGHTS
I am quie looking forward to this one as my daughter has read it and enjoyed the book. This book also has a section concerning the Titanic, and as my daughter is I am quite fascinated by most things Titanic related.

ENA'S REVIEW
I requested this one from NEtgalley and received a free e-galley in exchange for my honest review.
I was quickly pulled into the book, as the first part takes place on the Titanic. Ruby one of the main characters is a "maid/servant" on the great vessel. Nashey is travelling across to America to try and make a new life for himself. They meet when all hell has broken loose on the "ship that couldn't sink". Nashey meets Ruby and they endeavor to get out to the life boats. They have to navigate through the ship and use servants passages as third class is still locked down. I think though Nashey is a third class passenger he shows himself to be more of a "gentleman" than the second and first class male passenger's.
We also learn of how poorly White Star treat their employees after the Titanic sunk. I mean those who worked on the gigantic ship stopped getting paid the moment Titanic sank!
The rest of the book still features Ruby and Nashey, back in London. This part deals more with the Suffrage Movement and the factions within the movement itself. Where the mother and one daughter were more extremists and the more subtle way of being a suffrage.
the book also goes into how the women were treat when they are arrested for demonstrating. The manhandling of them by the police. Even a disabled protester being manhandled and literally tipped right out of her wheelchair.  The book also covers the laws around force feeding prisoners who go on hunger strike.
And all the while this is happening we see a sweet relationship developing between Nashey and Ruby even though Nashey is quite a lot older than Ruby. a chance encounter on the sinking titanic turned into a life long friendship.
Did I enjoy the book? Yes I really did. I admit there was a small lull after the book switches from the Titanic back to London. the book seems to move more slowly but then it picks right back up.
Posted by Jeanz xx at 13:00