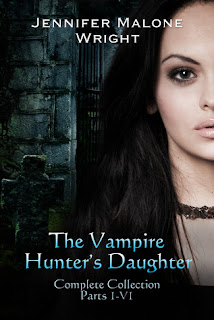 BLURB from Goodreads
This special edition of The Vampire Hunter’s Daughter contains parts I-VI, the complete collection. Fourteen-year-old Chloe witnesses her mother’s murder at the hands of a vampire. Before the vampire can kidnap her, there is an unexpected rescue by a group of vampire hunters. Overwhelmed by the feeling of safety, Chloe passes out and they whisk her away to their small community. When Chloe wakes, she comes face to face with the only other living relative, besides her mother, whom she has ever met: her grandfather. Chloe’s mother kept her hidden from the family; now, Chloe tries to unveil the family secrets. Through her grandfather, she learns her mother was a vampire hunter. In fact, her entire family is descended from the powerful bloodlines of vampire hunters. Chloe agrees to join the family she has never known for one reason only: Chloe vows to kill the vampire responsible for her mother’s murder. With vengeance in her soul, Chloe is even more determined to follow through on her vow when she discovers the true identity of her enemy and how he is connected to her. Experience the world of vampires hunter’s, vampires and mythology with Chloe in this exciting series.

MY REVIEW
I received PT 1 of this e-book complete collection directly from the author sometime ago but never had the chance to read it. So when Roxanne of Bewitching Blog Tours told me about the blog tour I decided it was about time I read this book. Initially I planned on just reading and reviewing PT1, but I have to say it is quite addictive and I wanted to know more so I ended up reading the collection! Which I felt I flew through and did enjoy a lot too.
So we find out that Felicia (Chloe's mum) was once a Vampire hunter. The scene/plot begins with Chloe thinking she is dreaming, but in actual fact its her mum shaking her awake. Then some men burst in and end up killing Felicia. Chloe is a witness to this and though she fights as hard as she can, she cannot prevent them killing her mum.
Then as the men are exiting the building with her some other men appear and a fight ensues. Is Chloe being rescued? Who are these men? In all this action and the trauma Chloe has been through causes her to black out.
When she wakes, she is in a bed that certainly isn't her own with people she doesn't know. However it seems that she is related to the old man who owns the house. Her life is about to change completely as she learns she is the daughter of a Vampire and Vampire Hunter romance. We follow the story as the vampires try to kidnap Chloe. Chloe has some difficult decisions to make, should she stay and train and fight or maybe she should sacrifice herself for the good of the others? Which is the right decision to make?
Then there's the romance triangle, Gavin is a hot guy but what are the weird feelings Chloe has for Drew? Which "Team" will you be on? Team Gavin? or Team Drew?
I could really go on and on
The book is fairly simplistically written, its at a decent pace that you don't need to struggle to keep up with the plot. Everything is explained as you read along. It's a really good series. Did I enjoy it? Yes, it was good as you could read it in "bite size" installments. Each novella/part set the scene for the rest of the collection. Would I recommend it? Yes, Would I like to read more about The Vampire Hunter's Daughter? Yes. Would I read more by Jennifer Malone Wright? Yes, I intend doing so.

The Complete Collection of Vampire Hunter's Daughter
is available at Amazon.co.uk