My name is Craig Gehring, and I was born and raised in Baton Rouge, Louisiana in the United States.

Do you work another job as well as your writing work?
Yes, I have an ad agency and small press publishing company in addition to my writing.

What is the name of your latest book, and if you had to summarise it in less than 20 words what would you say?
Nirvana Effect: Experimentation with a jungle medicine becomes a life-or-death struggle for ultimate power in this non-stop sci-fi thriller.

Who is your publisher? or do you self publish?
I have a small publishing company, Ring Publications, that puts out Sci-Fi Short Story Magazine.  I recently published Nirvana Effect under Ring Publications.  I have also had my sci-fi novella Norman published by MuseItUp Publishing.

What can we expect from you in the future?  ie More books of the same genre? Books of a different genre?
I am working on more sci-fi, including a sequel to Nirvana Effect as well as a new sci-fi epic, Throne of Stars.  I am also working on a line of educational workbooks for ACT and SAT test prep, following my recent publication of SAT ACT Mastery. 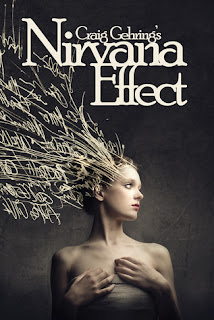 BLURB from Goodreads
A washed up missionary gets a second chance at his aspirations of a scientific career when he stumbles upon a jungle medicine that enhances mental and physical prowess. But the young native who discovered it has other, more devious schemes for the drug. What starts as simple research becomes a life or death struggle for power that reshapes the destiny of a primitive people and ultimately the fate of Earth.

What genre would you place your books into?
Sci-fi, and then I also do educational books.

What made you decide to write that genre of book?
I love reading sci-fi and being part of that community so it's a natural fit.

How long have you been writing?, and who or what inspired you to write?
I've been writing for over a decade, starting at a very early age.  I wrote an anecdote for my 8th grade English class about one of my grandfather's goofy dogs, and when I read the story aloud the whole class was laughing so hard it was out of control.  After that connection with my audience, I was hooked, and have been writing writing writing ever since.

Do you have anybody read your books and give you reviews before you officially release them?ie. Your partner, children, friends, reviewers you know?
Yes, my wife has to like it and my mother has to proof it before I send it off!  That's my two-step process.  I might also ask a few other people to proof it.

Do you gift books to readers to do reviews?
Yes, absolutely.  And anyone who would like to have a copy gifted for review purposes can email craig@ringpublications.com

How do you come up with the Title and Cover Designs for your book/books?Who designed the Cover of your books?
I am fortunate to have an ad agency and experience in graphic design, so with my most recent cover I did the design in-house and was pretty happy with it.

Have you ever based characters on people you know or based events on things that have happened to you?
I'd have to say that all of my characters are based to some degree on someone I've met or something I've seen.  I stretch what I've already experienced into a new experience.

What are you currently reading? Are you enjoying it? What format is it?(ebook, hardback or paperback)
I've just finished the whole George R.R. Martin Game of Thrones series and loved them.  I read them all on the eBook format, which is great for me because I can steal five minutes on my phone and get through more pages!

Are there any New Authors you are interested in for us to watch out for? and Why should we watch out for them?
A couple authors I published in the most recent Sci-Fi Short Story Magazine are definitely worth mentioning: John Cosper and Robert J. Boumis.  Both of them have bright futures ahead of them, for sure.  If you haven't heard of them, I encourage you to check out their work.

What piece of advice would you give to a new writer?
Write, write, write, and get your writing to an audience.  The fuel for writing is the effect that your writing creates.  So if you don't share what you write you'll end up burned out in short order.  And of course read even more than you write.

Do you think books transfer to movies well? Which is you favourite/worst  book to movie transfer?
I think most books have a hard time making it into film without a re-write.  Potter and Game of Thrones are two books to screen that I think did well.  Dune I would say is my all-time least favorite book to movie transfer.  I watched the movie recently and was really disappointed and also laughing at the cheesiness throughout most of it.  They used inner monologue to get through a lot of the plot, which seemed crazy to me.  Maybe it translated better all those years ago when it first came out!  That being said,Dune is one of my all-time favorite sci-fi books, so maybe my bar was too high.

Do you think children at schools these days are encouraged enough to read? and/or do Imaginative writing?
No, I don't think so and I think that part of the problem is that books have a hard time competing with movies and television.  All of this canned entertainment overloads the kids and a lot of them that would read end up on the tube instead.  I believe that school performance is directly related to how much a child reads, and that we aren't doing enough to engage our children to read and write.
Posted by Jeanz xx at 03:00