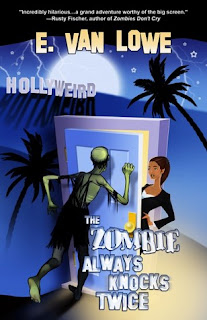 
The man coming up the block toward us in the hooded sweatshirt stopped directly in our path, about ten feet away.  The hood dropped revealing his face.  The hair on the left side of his head had been shaved off revealing tiny bits of bony white scalp.  Huge staples held his crooked jaw in place.  There was a large indentation in his forehead from some sort of blunt force impact.  His left eye was covered with a milky, white cataract, and the right drooped unnaturally into his cheek.
My breath caught yet again.  Standing before us was a zombie.
‘LEAVE US ALONE!” the zombie screeched.  Then he took off on a dead run and plowed into Alex with the impact a freight train.
Just great, I thought.  Hollyweird—where the dead come out to play.
Zombies aren’t what the movies make them out to be—slow moving, brain dead, brain suckers.  They’re the result of a raising gone bad.  They can be strong, and fast, and very dangerous.   Also, a bite from a zombie won’t make you a member of the living dead, although I’m sure it must hurt like hell.
The one that plowed into Alex was almost six feet tall and about seventeen years old.  He hit Alex with inhuman force, propelling him backward. They slammed into a parked car that seemed to explode on impact.  The twisting metal and shattering glass sounded like a horrible automobile accident.  The car was totaled, and Alex was embedded into the passenger side, like a toy soldier into a wad of Play Doh.
“Oh, God!” I screamed.
Alex’s eyes were closed.  He wasn’t moving… but the zombie was.  He peeled himself away from Alex and the wreckage.
“Zombie!” I called at the top of my lungs.  “I command you to tell me who raised you and what you are doing here.”
The zombie faced me, a puzzled look on his distorted face.  It dawned on me he hadn’t known I was a necromancer until then—not that it made a difference.  He wasn’t bound to me so he didn’t have to answer my questions.  I was bluffing.
“LEAVE US ALONE!” He screamed in response.  He started for me and a wave of fear rippled my gut.
“I command you to stay back!”  I called, but my voice was cracking, my words lacked conviction.  I took a few shaky steps backward.  The zombie continued toward me.
Just then the sound of twisting metal snagged both our attention.  Alex’s eyes were open, and he was separating himself from the wreckage.  He shed the automobile with the ease of a snake shedding an old skin.  He began advancing on the zombie.
“What’s going on down there?”  We all looked up and saw three men, all Johnny do-gooders, running up the block in our direction.
“Leave her alone,” one of them called.
The zombie looked from the advancing men to Alex and me.
“Hhhhh!”  Hot breath hissed angrily at us.  Then he took off past us like a deer, bounding up the block.  By the time the men reached us he was nowhere in sight.
“You ok?” one of them asked.
“Yes.  He… attacked us?”
“What the heck happened here?” Another of the men asked.  He was staring at the twisted pile of metal that used to be a Buick.
Before I could open my mouth, Alex launched into an explanation.  “My girl and I were out for a stroll, and he was taking a sledge hammer to that car when we happened upon him.  Guess it was some kind of vendetta.  And when he saw us he decided to add us to the list.”  The lie flowed from his lips effortlessly.
“Hey, aren’t you on that TV show?” the third man asked.
Alex smiled.  “The Beloved.  Yes.  You watch it?”
“No, but my girlfriend does.  She can’t get enough of you vampire guys.”
Any suspicions the men may have had about our presence on the street or Alex molesting me immediately vanished.  Alex was a bona fide Hollywood star.  I guess they thought all stars were boy scouts.  Where have they been?
Several minutes and three autographs later the men were gone, and Alex and I were walking back to the party.
“You told that lie like you do it all the time,” I said.
“I’m a dead person among the living.  I do do it all the time.”
That wasn’t what I was talking about, but I didn’t push it.  He seemed annoyed.  I guess being attacked by a zombie wasn’t an everyday occurrence for him either.
“If it makes you feel any better, I memorized the car’s plate number.  I’ll take care of the damage,” he said, his words softening.
“Thanks.  That does make me feel better.”  I wanted to hold my tongue, but I couldn’t.   “So, you have any enemies who’d want to send a zombie after you?”
“I don’t have any enemies.  I’m a lover not a fighter.”  The annoyance was back.
“Maybe you loved the wrong woman.”
“I’m dead.  I can’t love any woman,” he replied.  The words were seething with anger or pain.  I couldn’t tell which.
“He said ‘leave us alone.’  Who’s us?” I asked.
“I don’t know!”
He was getting agitated again so I dropped the subject.  But not without noting there was more to Alex than he was telling me.   A vindictive zombie had been set loose in Hollywood.  It was something I needed to look into along with the deadie from the diner.  My, my, I was suddenly a very busy girl.

This is a Tour Wide Giveaway

Open to US Shipping only! Enter below: